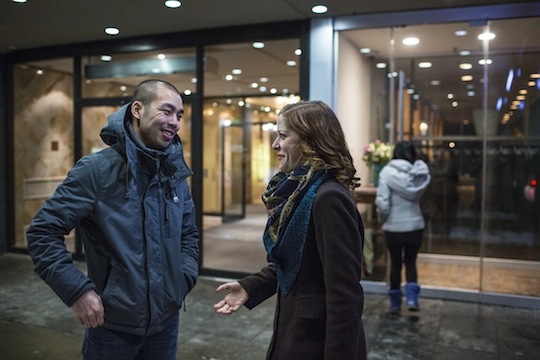 So, this happened. (How could I possibly turn down the opportunity to go on the only legitimate blind date that I'll ever go on in my life? With my superior Googling abilities, it's unlikely that I'll ever again be set up with someone without knowing a singular thing about them beforehand--including what they look like.)

Here are the answers to the pre-date questionnaire that I had to fill out:

What do you do for fun? I own a collapsible hula hoop, a stunt kite, three different Scrabble boards and a well-used library card. I’m pretty physically active—I work out a lot and like to go running with my dog. I’m game for nearly any activity proposed to me; in the last year I went dog-sledding, trap shooting (it turns out that I’m awesome with a shotgun and pretty much a sniper), to circus school and ice-fishing. I occasionally organize and host trivia nights. However, much like every other twenty-something living in the Dundas & Ossington neighbourhood, I’m a big fan of eating at restaurants with low lighting, hanging out in coffee shops talking about my feelings, and listening to music. (Things I do not like: shopping. It’s the worst.)

How would you describe your style? I asked a friend who works in fashion and she said that my style is “an eclectic Anthropologie.” I have no idea what that means, but I tend to wear a lot of tailored dresses.

How would your family and friends describe your personality? I’m incredibly energetic, kind of silly and tend to approach my life as a bit of an experiment.

What would you do on your “dream date?” Something that I’ve never done before. Like, if a dude took me noodling for catfish, that would be pretty awesome. Seeing as we’re a bit far from Louisiana, I’d settle for someone cooking me dinner, though.

Describe your ideal partner: I pride myself on not having a “type,” or particulars that I’m looking for in a partner. I don’t want to limit myself. However, I like dudes who aren’t lazy, like their families (but aren’t holding on to the apron strings) and understand small-town community values. (That’s not to say that they have to be from a small town. They just have to understand why I frequently bake cookies for my neighbours and why that’s not weird.) If they know how to cook, that’s a bonus, because I really like eating.

Do you have any dealbreakers?
Anything else I should know?

Here are a couple of things about me that could be dealbreakers for potential dates:

Email ThisBlogThis!Share to TwitterShare to FacebookShare to Pinterest
Labels: dating