Two Rants, One Blog: The Updates

I wrote something other than a postcard. This is it.

Two weeks ago, I was called in to an interview for a job. I went. It was okay, but I knew I wasn't right for the position.

When I got home, I checked my sent messages folder only to realize that they had invited me in for the interview without ever seeing my resume. I forgot to attach it to my application. (A shame, too, because my carefully tailored resumes are a sight to behold.) But they still asked me in.

This was really good for my self-esteem.

I didn't get the job.

Last week, after an intense application process, I was invited to interview for an internship at a well-known magazine. I went. As I sat in a tall leather chair that probably cost more than my entire wardrobe, I felt beads of sweat running down my back. I was nervous. Unlike the job, I knew that I was right for the internship. It was a great learning and networking opportunity at a magazine that I love.

There was just one hitch: the position was unpaid.

But as I left, I knew I had no reason to worry. I had bombed the interview. I took strange comfort in knowing that.

The next day they called to offer me the job.

It was a hard decision. I thought a lot about my peers, particularly the ones who accepted unpaid internships shortly after graduating and I thought about how far they've come. I wanted that. I want that.

It's not the first internship I've been offered. A week out of school, I was offered a place at one of Canada's biggest magazines. I really wanted it. And sure, it paid. It paid a $800/month, to be exact. My rent at the time was $700/month. The same day, I was offered a meagre salary of $28,000 and benefits at a non-profit organization. Guess which one I accepted?

The post-secondary system is obviously stacked in many ways, most clearly against those who come from lower-income households. But from start to finish, it's also stacked against "rural" Canadian women who want to access employment that doesn't include becoming a health care practitioner, an educator or a homemaker. (All of which are chosen professions that I respect, but just weren't right for me.) In addition to paying twice as much to obtain a degree of my choosing because living with relatives simply wasn't an option (at the time of my application to school, undergraduate degrees in journalism were only offered in Ottawa, Halifax and Toronto), I've failed tests because I didn't know who Ontario Governor General was (classmates were shocked—yet they didn't know who Lois Hole was) and had reduced access to Ontario-specific grants and loans.

In the three years since I graduated, little has changed. Show me a person who has accepted an unpaid internship and I'll show you a person who moved home in order to be able to afford it.

No matter how much I wanted the internship, I couldn't accept it.

I sent my resignation (or whatever the equivalent of resigning before you even start is called) email on the way to one of the four jobs that I've been working to make ends meet.


I know that later I'm going to regret turning the internship down, but right now I'm too busy working to think about it much. I have one new contract and a contract extension into the new year. (Unpaid internship or gainful employment in my field? Maybe it seems like an easy choice, but it wasn't.)
But there's something else that's really been bothering me lately. Despite the fact that everyone seem to think that I sit around my house eating bon-bons and playing with my dog all day while upbeat montage music plays, most days I barely have enough time to shower. (Actually, it's 7:30 p.m. as I'm typing this and it just occurred to me that I have yet to brush my teeth today.) Photographic evidence follows:

So for those who have never freelanced, here's a fun fact: as a freelancer, you'll always feel like you're poor. I still haven't been paid for work that I did in June. When I decline dinner, it's not because I don't have money because I'm too busy refreshing Facebook all day long—it's simply because I don't receive a lump sum in my bank account at 12:01 a.m. every other Thursday. And sure, I take off time to go travelling. But I also work seven days a week, sometimes for 12 hours at a time so that I can afford to go travelling.

I'm not asking anyone to sympathize with this. It's the lifestyle that I've chosen for myself (at least for now) and I like it. It's kind of awesome, actually. I can drink hot chocolate in the afternoons, wear my pajamas all day and cuddle with Brockton while I write.

But you know what's not awesome? People criticizing, judging and making assumptions simply because my current career doesn't fit into the nine to five status quo.

You can stop now, please, because it makes me second-guess myself. (It also hurts my feelings. And. . .cue Flight of the Conchords for this montage scene.)

My friend moved away. I miss her.

I helped her move further away from me. In the pouring ice cold rain. At night. While I had menstrual cramps. Directly after my weight lifting class.

I'm going to embody the word "hustle." It's going to be awesome.

But I'm still going to put Amarula in my coffee and snuggle with my dog while I write. 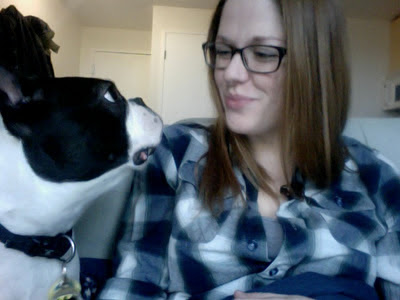 It's a solid plan.