There's some aspects of starting out as a freelancer that make me feel a bit like a five-year-old clunking around the house in my dad's work shoes. They make feel grown-up, but to observers the overall effect is just comical.

Even the job title is clunky and unsettling. I try avoid saying it out loud. Instead, I prefer to tell people that I'm unemployed.

(Or, in the case that I'm talking to someone born before 1962, I might tell them that I work in international development. The term is just jargony enough that they pretend to know what they means--but they really have no idea, so there's little opportunity for awkward follow-up questions. Or, if I'm feeling particularly in need of establishing that, contrary to my appearance, I'm not a 21-year-old general arts undergrad, I might even go so far as to say that I'm an "international development practitioner." But I'm not. I suppose in conversation with non-profit peers I could legitimately refer to myself as "field staff." But then I run the risk of hearing about the three years they spent working with genocide victims in the Congo and how they single-handedly started an organization that gives refuge to blind children orphaned by HIV/AIDS. And then my measly two weeks in Guyana would just sound kind of lame.)

There's less shame in being unemployed. It's arguably less embarrassing than trying to pass myself as a "freelance writer." (I would never, ever say "freelance journalist." That would imply that I actually know what I'm doing. And it would likely result in uncomfortable conversations about "the media," which has to be my least favourite idiom. Except that I'm not even sure that that term is technically an idiom. This just serves to further illustrate that I don't know what I'm doing here.) In fact, I'm sure if I told people that I was a childless stay-at-home wife, it would be more publicly acceptable.

My friends (that would be the ones with gainful employment at national publications) can't seem to understand my reluctance. I should embrace my career change! (Can one legitimately have a "career change" only three years out of school,  particularly when the career that one is "changing" to is the same profession that one went to school for in the first place?) Pitching should be easy. In fact, I'm a step ahead--I've never had to sit in a radio room, I've never had to fetch anyone coffee, and I've never had to stay out late drinking with the editors just to make sure they remember my name.

But that's just the problem. I've never sat in a radio room. I've never fetched coffee. I've never been invited out drinking with my editors. (Other people's editors? Sure. But they definitely don't remember my name.)

I know that I'm not selling myself short here. Eight months of unemployment has given me plenty of time to evaluate what I am and am not good at. Just like I know I'm not good at choreographed dance routines, I know that I'm not good at pitches or story ideas. I am, however, good at meeting deadlines. I am not good at using commas and I use em-dashes in excess--but I can use a semi-colon correctly. I am not good at using big words (as evidenced from my "idiom" attempt above) or creating complex metaphors. And while I'm being completely honest here, my sense of story structure is probably a 6.5 out of 10. But I'm good at submitting clean work of the requested length. And that should count for something, right?

And I know that at some point, it will. But for now, if anyone asks, I'm unemployed. 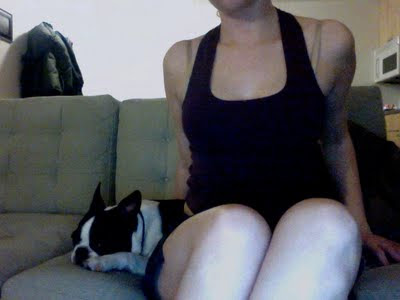 In other news, last Thursday I attended a social media conference hosted by AutoShare, where I fell in love with Shawn Micallef and his tales of Rebel Mayor. I also got to listen to a ton of speakers present on why social media isn't the bee's knees. Particularly of interest was Nolin LeChasseur's presentation. He spoke about how people are desperate for information that will help them solve a problem in their lives. (Did you know that "how to" and "how do I" are the most commonly Googled phrases?) His number one rule for social media engagement? It's about them, not you.

[Edit: Much love to my personal champions and aforementioned friends who never seem to get annoyed by my way too frequent "I'm unemployed and chickenshit" self-pitying rants. Your verbal ass-kickings are the only reason I haven't given up yet.]
Posted by Jess at 6:00 PM