How to get your girlfriend what she actually wants for her birthday.

It's Sunday, it's raining and Brock is contentedly destroying his monster toy (a Frankenstein toy comprised of various parts of previously destroyed toys). I have work to do, but instead I'm reviewing my budget and lamenting my negative bank account balance. What better way to turn the day around than to write my birthday wish list of things I want and need, but can't possibly afford!

A couple of weeks ago, Jay asked me what I want for my fast-approaching birthday. I had no idea, so I Googled it. (Yes, that's right. I actually typed "what do I want for my birthday?" into a search engine.) I should have known the results would be disastrous.

The results were appalling. The Internet is a smorgasboard of shitty service features on gifts you should and shouldn't get for your girl. (Blog post spoiler: candles are NOT "always a safe choice" "since most women like to decorate their rooms with them." The last time I got candles, I nearly cried from boredom. The guy in question told me that it was because his mom likes candles. Fact: Just because your mom likes it, doesn't mean your girlfriend will. Sub-fact: You are not dating your mom.) After reading the lists, I can't help but wonder who are these women who are "treating themselves to foot massages after a long day at work" while wearing their "personalized thong bikinis" anyway?

Okay, so I get that some people are just bad at gift-giving. I get that it's a nerve-wracking experience. I get that there are women out there who read into every little action when it comes to gifts, looking for fault or subtexts of marriage. And I get that some ladies actually like getting candles.

But if you're one of those guys who is going to categorically determine that your girlfriend is a "geeky girl" or a "fit chick" based on some shitastic man magazine article, maybe it's time to rethink being in a relationship altogether.

Fact: Maxim thinks its readers are stupid enough to believe it's 1958.

However, if you're mature enough to realize that your girlfriend doesn't fit into some tidy category, but you're still grappling for gift ideas, here are a couple of places to start:

Play to her childhood whimsy.

On the morning of my 24th birthday, Alex Dodd and I were setting out from Owen Sound to visit the Collingwood Caves. But instead of heading towards the highway, Alex started driving downtown. "We need to make a quick stop first," he told me cryptically. After parking the car, he led me, of all places, into a toy store. Once inside, he guided me to a display of stunt kites. "Pick one out," he told me, "and happy birthday."

Why a kite? Because weeks earlier, I had mentioned that when I was a kid, I loved flying kites. On weekends, my family would go out and fly a giant purple octopus in the field by our house. From a simple act of shared nostalgia came one of the most thoughtful (and unique) presents I've ever received.

My first-ever boyfriend, Adam Wilson, gave me a pair of sterling silver heart earrings for my 15th birthday. I can remember the moment like it was yesterday--I remember the excitement of eagerly opening the blue velvet box, followed by immediate disappointment, and then the subsequent realization that if I didn't dump him (and soon), I would actually have to wear the things.

Because at 15, not only did I hate anything too feminine, I was also struggling to assert my individuality. And the person who was supposed to love me best for being me--the unique snowflake that I was--had just given me mass-produced heart-shared earrings. Barf.

You know that scene in Eternal Sunshine of the Spotless Mind when Clementine gets a necklace from Patrick (technically it was from Joel) and she's shocked at how to her taste it is? ("I've never gone out with a guy who bought me a piece of jewellery I liked," she tells him, surprised.) Let that scene serve as your inspiration--not the weekly special at People's Jewellers.

Contrary to what you've been led to believe, household appliances are not necessarily off-limits.

I like practical things. For my 25th birthday, Jay got me a Swiss Army Knife right before we took off for a backpacking tour of Croatia. It was simple, affordable and practical. Perfect.

But last year, his gift was so practical and perfect that it brought me to tears.

All week, co-workers and friends alike had been asking me what I was going to do if he proposed. (Or rather, in their minds, what I was going to do when he proposed.) And although I knew the likelihood of that occurring was highly improbable, there was a small part of me that worried they were right. So by the time my birthday rolled around, the idea had ingrained itself so deeply in my amygdala that when he took me to Trinity Bellwoods Park, with no gift in sight and insisted that I sit down to receive it, I was terrified. (To me, marriage is a conversation, not a question.) 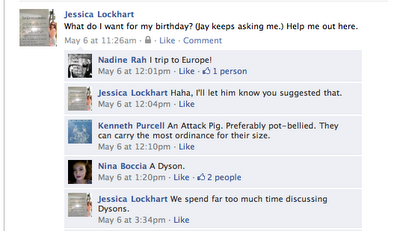 Similarly, my circle of friends swoon over Dysons. They're a topic of dinner conversation at least every other month.
In conclusion, nothing is off-limits. We're adults, not teenage girls. Buying practical, is well, practical.
Celebrate them.
This is a story I've related to many female friends--both single and attached--and without fail, it makes them swoon:
Two years ago, I was at a hair salon getting a cut and colour. While there, I overheard a young blonde woman talking to her stylist. Her boyfriend had surprised her by sending her to the spa for the day. He was paying for her cut and colour before they went on a date that night. Cute, right?
But it gets better. When the blonde girl's hair was done, the stylist handed her a large box with a bow around it. (Turns out, the boyfriend had given the hairdresser instructions to present the box at the end of the appointment.) Inside was a black lace dress from Mendocino, a pair of black heels and a note instructing her to put them on. Both items fit her perfectly. Once she was dressed, her boyfriend showed up exactly on time to whisk her away on their date.
While I have no idea what the rest of the night entailed, I also have no doubt that it contained more surprises and careful planning. And that's the exact reason girls like this story--it isn't because they all want a new outfit, or to go to the salon for the day, or even to be surprised. It's because of the thought and planning that went into the gift. The dude had planned out the day for his girlfriend down to the very last detail, picking out things he knew that she would love.
And that's the thing--the point of celebrating birthdays isn't about getting older or eating cake or getting to be the centre of attention for just one day--it's about celebrating birth. It's about celebrating the fact that the person you love exists. And in the end, that's all anyone really wants on their birthday--to know that someone is grateful they were born and to be reminded that they're loved.
Posted by Jess at 5:55 PM