It was the only Miss Universe rehearsal that I dressed up for. 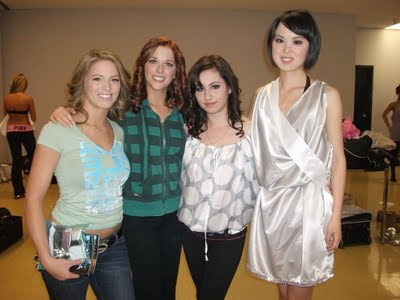 Most days I showed up looking slovenly compared to the other girls. While they rocked black tights with five-inch heels and coordinated earrings, I showed up to the studio in the same pair of faded jeans (purchased at Winners, no less) and whatever t-shirt was on the top of the pile.

But this rehearsal was going to be different. With only three days until the show, I was making a last-ditch effort to step up my game. I wore my trusty brown ankle boots over black tights and a borrowed French Connection dress, complete with power shoulders.
My outfit wasn't the only thing that made this rehearsal different. Rather than having criticism slung at us as we stumbled through our dance routines for the 83rd time, we were finally being given a chance to practice for the interview portion of the competition.

Waiting for the rehearsal to begin, we sat in rows murmuring about what the questions would be like. As Denis, the pageant director, came into the room, everyone was still sharing horror stories of pageant contestants who somehow simply got the answer wrong.

Denis gave us one final pre-show pep talk before instructing us to write down two of the most "intelligent" questions we could think of. "And take notes," he told us, "because we'll be using the questions that you write on the night of the pageant."

I gnawed on the end of my pen as the girls around me confidently wrote down their questions. This was going to require some thought.


My first question, which I had been once asked in a job interview, was admittedly difficult. But, I rationalized, we had been instructed to write down the most intelligent questions we could think of and it was the first thing that came to mind:
1. How do you feel about mixed member proportional representation and why?

Hmm. Time to follow that up with an easier question.

2. What reforms would you like to see made to your electoral process?

Yes, that was good. It could be answered directly ("I would like to see the first past the post system abolished") or in classic vague pageant-style ("I'd like to see more youth get out and vote" or "I'd like to see voting made more accessible for students").

Happy with my questions, I handed them in.

For the next two hours, we went around the room. Denis would call on a girl, ask her to stand up, and then he would read her one of the two questions from each scrap of paper. As he read each question, everyone would furiously scribble down both the questions and the responses. The questions themselves varied quite greatly--from the typical abortion and same-sex marriage queries, to questions about Wiki Leaks and dental hygiene.

After I confidently answered my question, I sat down feeling like any chance for embarrassment had passed. I was wrong. My questions still had not been asked.

Denis called on one of the last girls and she stood. "How do you feel about mixed member proportional representation and why?" he read aloud.

A hush came over the room and then the murmurs started.

"Who would even ask that?" someone said in disbelief and others nodded in agreement. "Um, I did," I admitted, my face turning crimson.

"Okay, how about this one," Denis continued, reading my second question, "what reforms would you like to see made to your electoral process?"

Again, it was quiet. "I don't know how to answer that," the girl admitted.

"Don't worry, don't write those questions down," Denis told everyone. "We won't be using them in the pageant," he said, tossing my intelligent questions aside.
Posted by Jess at 4:44 PM