Free Parking: How I Found Myself in Debt

Remarkably, I made it more than halfway through my university education debt-free.
It was a point of pride: I worked hard, I saved a lot, I earned scholarships and I was fortunate to have parents who financially supported me. But shortly before my third year, the game changed completely in just a four-month period.
Here's how I found myself in debt:
So what was a girl to do?
For the first time ever, I applied for student loans and maxed out my student line of credit.
I tried to assure myself that it would be okay. And it was. Sort of. Throughout my third year of university, I valiantly tried to eradicate the debt I had suddenly accumulated. I wanted my debt-free bragging rights back. In addition to my job at the university, I took on a second job and then a third. So there I was, in school full-time, with three part-time jobs on the go. It was a solid plan, until my health began to decline. I could barely make it to class for six weeks, let alone to work. The debt was here to stay.
The summer before my forth year, I saved enough money to pay my tuition in full. Again, with the help of my parents, I didn't have to take out additional student loans. And this time, I was a little more sensible--rather than struggle to maintain my multiple part-time jobs, I just had one. School became my priority.
Where I Am Now
Five years after I took out those first student loans, I'm still in the red. And although I've written about my debt a lot on this blog, I've never put a number to it. I didn't want to open myself up to criticism about my lifestyle or spending choices. But I'm beginning to think that publicly putting a number to it will shame me into getting my finances sorted out. So here goes:
Since 2006, my debt has hovered around $10,000. (Note: This does not include an undisclosed but substantial chunk of change that I owe my Dad for his assistance in South Pacific adventure.) Sometimes it's a bit more, sometimes it's a bit less. But it's always around $10,000. (Not surprisingly, $10,000 is around how much I spent in Australia and Vanuatu combined. I'm confident that had I not volunteered overseas, I would not be in debt today.) This wouldn't be such a terrible admission, except for this final act of divulgence: I have no savings. None.
So basically, I'm $10,000 the hole and have no assets.
This is a problem. A very big problem.
How did this happen?
For the last three years, I've been in a constant cycle of attempting to pay off my debt too quickly, not having enough money left for spending, dipping into savings to cover the difference and subsequently getting further into debt. It's a nightmare that I've created for myself.
And then, last August, I was laid-off. Any budgets or debt repayment plans I had created were suddenly useless. I applied for interest relief on my student loans, but that still left me with three credit cards and a line of credit.
So, why don't I just get a job?
Before the haters start in on me, I'd like to clarify that since my lay-off there has only been one month where I haven't been employed, either through a part-time job, a freelance contract or a contract employer. However, my income isn't yet consistent enough to create a solid debt repayment plan.
So why don't I get a regular guaranteed-income job? A couple of years ago, when my brother was on EI, he explained to me that he received more in government support than he would make at a reasonable minimum wage job. Instead, it would be more profitable in the long-run to spend the time working on his portfolio.
At the time his argument didn't make any sense to me. But now that I'm in that exact position (that being the position of someone who previously talked down about people who "worked the system" but am now "working the system") I completely understand. Every day, I scour job banks looking for part-time employment that will allow me sufficient income to continue working on my portfolio and my freelance career. Sometimes I apply. Sometimes I go to interviews. But every time, I realize that minimum wage or similar is just not enough. And unfortunately, with upcoming contracts and travel plans, applying for full-time positions isn't an option.
I feel imprisoned by my debt. . .if only there was a "get out of debt free" card.
But there's not.
So in the meantime, I'm going to do the next best thing: 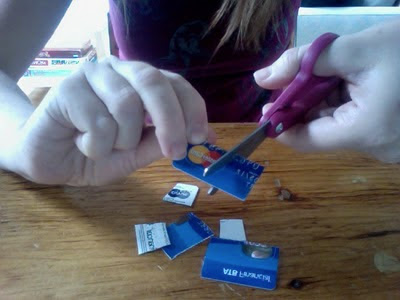 Jay and I watched the documentary Maxed Out last night. I knew instantly it was time to break up with my Mastercard. (AMEX and Visa? Don't think you're safe. You're next on the cutting block.)
In April and May, I'll move into Phase 2 of Year of the Deal: tracking my overall spending and creating a budget.
Posted by Jess at 11:48 AM

Email ThisBlogThis!Share to TwitterShare to FacebookShare to Pinterest
Labels: debt, unemployment, Year of the Deal