For those of you who only know me in blog life, I apologize for my lack of posts as of late. Right now, I'm actually getting paid to write. And unfortunately, blogging doesn't pay. (Except, of course, when you all helped me fundraise for Miss Universe Canada. And when Alex Dodd's apartment burnt down. And when marketing companies send me free stuff, which I'm really into, by the way. But apart from these exceptions, blogging is not very profitable, at least in my case.)
However, I still have time to procrastinate, it seems. Case in point: 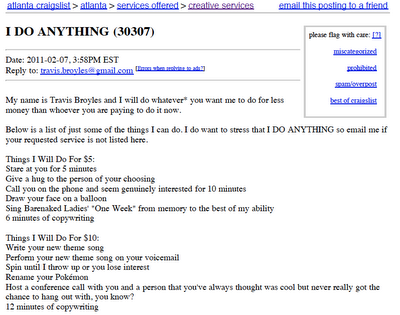 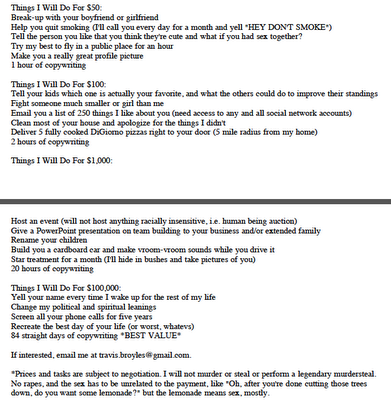 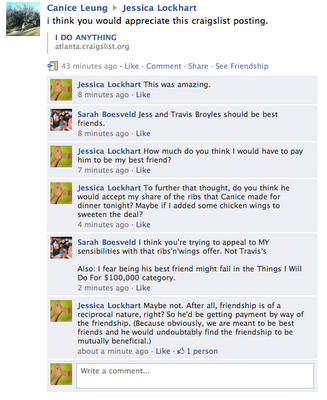 (Click images to enlarge. I took screenshots because allegedly the posting was flagged for removal.)
I've determined that in order to prove to Travis Broyles that we are, in fact, kindred spirits, I first need to ask him to do something since after all, he is willing to do anything. And as tempting as my own theme song is (only $10!) sounds, I don't think that ordering something off of the list he presented would seal the deal. (That would be the equivalent of trying to befriend a tattoo artist by picking a butterfly tattoo out of the book and then raving about how much you love watching LA Ink.) I need to wow and impress him with my task request, which will be so amazing that he'll offer to do it in exchange for the promise of my undying friendship.
So, what should I ask Travis Broyle to do?
_____________________________________________________
Four other pertinent updates for my blog-only friends:
1) One of these guys came to a party with me on Saturday night. I don't know what was more humorous--introducing him as my "new friend who I picked up at the bar," or when everyone would whisper loudly behind their hands, "This is the guy you blogged about, right?"
2) No, I never got a call from this company. Could have been that my keen proof-reading skills failed to pick up a couple of errors before I emailed it. (Contrary to popular belief, I am far from a perfectionist.) However, moments after I sent my application through, I was offered another contract that will keep me busy well into March. (So much for the layoff list. I have three contracts to complete this month.)
3) Year of the Deal update: On February 7th, I paid $3.95 for $24.55 worth of purchases. Had I left the house with all my coupons, I would have only paid $2.95. (Sunlight dish detergent was 99¢ at the Shoppers in the Eaton Centre and I had a coupon for $1.00 off at home.) Lesson learned. So far in February, I've saved exactly $69.
4) Brockton is super healthy, not to mention cute and really annoying. No giardia. No laser shit. Just teething. All is well with the pup.
Posted by Jess at 1:32 PM

Email ThisBlogThis!Share to TwitterShare to FacebookShare to Pinterest
Labels: Brockton the Boston, craigslist, pickup lines, unemployment, Year of the Deal