A History of Eating

At 5:30 pm every night, everything stopped. No television, no phone calls, no video games, no toys, no homework. Only one activity occurred in that hour: eating dinner as a family.
In our house, anyone who dared call between 5:30 and 6:30 would get the same automatic response from one of my parents: "Sorry, but Jessica's eating dinner right now. She'll have to call you back later. Can I take a message?" Callers who were bold enough to leave their name were unknowingly setting themselves up for months of future discrimination. (Because clearly, anyone who called during suppertime was a no-good heathen whose parents didn't feed them.)
The fact that our family ate dinner together every night was a point of pride for my mom. "Does [insert name of any friend I ever made here]'s family eat supper together?" my mom would ask inquisitively. If I confirmed that they didn't, her eyes would light up in triumph. "Aren't you glad we eat dinner together?" she would say proudly. It wasn't a question.
Dinnertime was family time.
Sounds lovely, right? Well, there was just one small problem--I was a picky eater of epic proportions.
I initially thought the best way to prove this statement would be to write a comprehensive list of all the foods I wouldn't eat. And then I realized that would be impossible. Instead, here's a list of the foods that I would eat, without complaint:
-Kraft Dinner
-plain spaghetti with butter (and later, as my tastes matured, parmesan cheese)
-chicken fingers
-crackers and cheese (although only particular kinds of crackers and again, I wasn't a big fan of non-melted cheese)
-toast with peanut butter
-candy (I wasn't discriminating. If it had sugar in it, I would eat it.)
-grilled cheese sandwiches
-On holidays (Christmas, Easter, Thanksgiving): buns and cranberry sauce
Anything that doesn't appear on this list would ultimately invoke the wrath of my gag reflex.
Unfortunately, my mom refused to cater to my self-inflicted dietary restrictions. (Andrew's list of likes was only marginally longer than mine. His favourite foods were potatoes with butter and white rice with butter.) We got whatever was on the table.
No worries, though--I developed strategies for dealing.
I'd chew up pork chop, hide it in my cheek until the end of my meal and then stuff the remains behind the piano. Peas went under the placemat. I'd chew food and spit it out in the bathroom. (Thereafter, leaving the table during meals was regarded as a highly suspicious activity). My mom found weeks-old bowls of milk moulding under my bed. (I didn't mind cereal, but I couldn't stand drinking the milk that the cereal had been floating in. As an adult, I eat cereal with only a couple tablespoons of almond milk.) I even stuffed food into the cracks and widget holes beneath the table.
Our house was turning into a hidden smorgasbord of semi-masticated rotting food.
But it wasn't until grade three, when my teacher discovered that I was throwing out my lunch, that the food war came to a front. (I was caught throwing out a cheese bun. Although I liked cheese and I liked buns, I did not like cheese buns.) A further search of my bedroom uncovered a garbage can of rotting school lunches.
As it turned out, my picky eating was translating into far scarier territory. I stopped zipping my winter jacket up because I was convinced that it made my eight-year-old prepubescent frame look "fat." One afternoon, I broke down in tears and confided in my mom. When she asked me what I wanted to look like, I pointed to the illustrated cover of a Baby-Sitters Club book. (And you thought Barbie dolls were to blame for negative body image? Well, it turns out the public library is equally problematic.) My mom, who up until that point had pulled out a scale every night to weigh her butter, quit Weight Watchers. 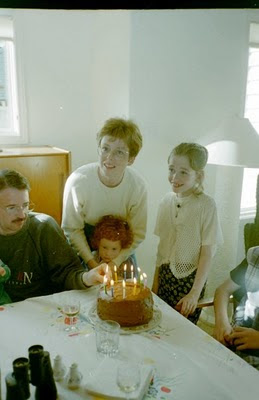 At 10, I didn't look like one of the girls from the Baby-Sitters Club books. Instead, I looked like a 10-year-old. (Pictured here with my aunt, uncle and cousin. I'm the skinny little girl.)
While my parents dealt with my "eating disorder" in stride, they didn't have as much patience for my pickiness, which continued well after I realized that I was, in fact, quite skinny.
For example, there was the time my mom made chocolate zucchini cake for my birthday, which even in retrospect I think was a tad cruel. (Birthday cakes should never be a way to teach a lesson.) And then at 12, when I developed a serious aversion to meat, my dad took to braying "Baaaaabe" whenever pork or lamb was on the table. (Convenient year for that movie to come out, really.)
The dinner table had turned into a war field. Every meal was a battle.
Meals often ended in me sitting at the table alone, staring woefully at the three green beans left on my plate. I wish I was joking when I say that our family albums are filled with countless photos of me crying at the dinner table. (My family also took great pleasure in taking pictures of my miserable face whenever we had fish for dinner. It was a solid strategy for mitigating my food-related tantrums.)
(Just in case it's not clear, that last sentence was very bitter sarcasm.) 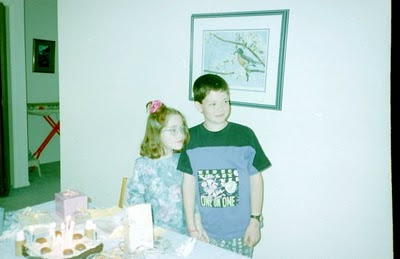 My 9th birthday. Photographic proof of the zucchini cake in question. My mom thought she was being sneaky, but shortly after this photo was taken, I threw an epic tantrum. There's probably a photo of that, somewhere, too.
By the time I was a teenager, my palate was expanding to accept more foods. (I think ranch dressing suddenly became permissible, which was a big step forward.) I began to accept the occasional dinner invitation, which I had previously generally avoided because of my pickiness. (Whenever I was issued an invite, I would lie excessively about my known food allergies. Basically, my "allergies" were everything that I wouldn't eat. Birthday parties were easier to navigate because at least there was always candy.)
But my progress came to a sudden halt when I was hospitalized as an outpatient for a week in grade nine. I was throwing up blood and couldn't keep anything down, including water. In the weeks that followed, I still had trouble eating much other than bread and crackers. It was only a couple of weeks, but in teenage time it felt like months.
My last meal had been strawberry shortcake. I wasn't really big on strawberries prior to getting sick (too many seeds and weird little hairs), but afterwards they moved onto the "allergy" list. 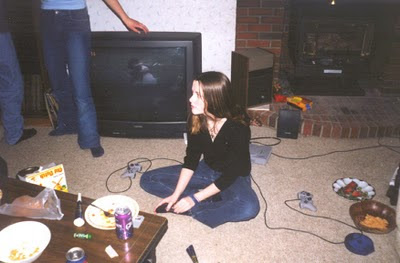 Although I gained back the weight I lost during my illness, I was still borderline underweight.
By the time I was in high school, I had developed a new food-related neurosis: eating in front of people. The idea of chewing and swallowing food in front of boys was inherently unsexy. So for lunch, I would pack the following: two fruit cups, a granola bar and a juice box.
And while I'm airing out all my dirty eating-related laundry (mixed metaphor much?), I have one final confession to make: I didn't and don't like my food to touch. The idea of mixing peas with potatoes disgusts me. As such, sauces (including gravy) were once non-permissible. Juices from one food touching another was also a deal breaker.
For my 18th birthday, my mom marked my rite of passage into adulthood by presenting me with my very own divider plate. It was pink to match my hair. 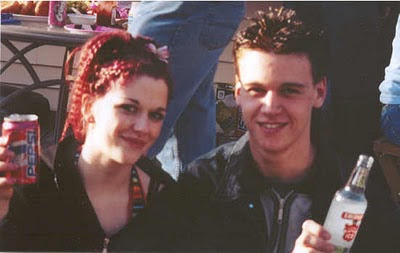 On the day of my high school graduation and 18th birthday my parents hosted a party. They bought alcohol for my friends who were already 18. So why the Pepsi? I didn't like the taste of alcohol. (And who would, if you were only ever offered peach schnapps and Smirnoff Ice?)
Today, I'm proud to say that I'm no longer a picky eater. I've learned that I'm a texture-based eater and will eat most foods if they're prepared a particular way. Travelling has also done for me what years of chocolate zucchini cake never could; I just got over it. (I even went so far as to choke down the fish sauce our hosts prepared for us in Croatia when I forgot to tell them that I'm "allergic" to fish, not to mention a vegetarian.)
In fact, most of my friends don't know about my food issues. I've worked my way up to eating certain foods just to maintain polite company. I'm also very strategic when it comes to serving myself--in the case of salads, for instance, whatever ends up on my plate is usually primarily greens. (You now know all my secrets. Please don't judge me at the next potluck!)
I may no longer be a picky eater, but my favourite meal is still Kraft Dinner and I still tell people that I'm allergic to fish.
And you know something? Zucchini cake and braying aside, I know now that my mom was right. I count myself among the lucky because every night, at 5:30, my family would sit down and eat together.
_________________________________________________________
Jay claims that he's going to write a children's book called "Jessica the Pickiest Vegetarian."
Curious about what I still won't eat? Here's a random sampling of the foods that I find really hard to swallow down:
-Celery (aka the devil's food)
-Mushy broccoli
-Raw broccoli (the only raw vegetables I'll consume off a party platter are cucumbers, carrots and very occasionally, red peppers)
-Cooked spinach
-Canned peas
-Whole tomatoes
-Cherry tomatoes (I've tried, trust me)
-Green olives (unless they're hidden)
-Red onion
-Fish
-Any type of seafood including: shrimp, prawns, canned tuna, mussels, clams, fake crab meat, real crab meat or lobster.
-Mushrooms (but very specifically canned, button mushrooms)
-Mustard
-Ketchup
-Relish
-Mayonnaise (garlic mayo is sometimes permissible)
-Potato salad (unless the mayo is cut with something else)
-Egg salad sandwiches
-Pea pods (cooked or raw, but it's way worse if they're raw)
-Pickles
-Kale
-Most soups, but particularly plain tomato soup and cream of mushroom
-Cooked cabbage
Then there's the things I eat, but don't really like:
-Pizza with tomato sauce (unless it's plain cheese pizza)
-Onions (they must be finely diced or well-cooked)
-Portobello mushrooms
-Eggplant
-Turnips
-Strawberries
-Basically any flavour of potato chips other than sour cream and onion (I prefer corn chips to potato chips)
-Peanut M&Ms
-Omlettes (Too. Much. Egg!)
-Bananas
-Pineapple
-Cold sandwiches
-Broccoli stems
Things that I really I like that I probably shouldn't:
-blue cheese
-fruit cake
-bread pudding
This blog post was inspired by Katie Daubs' series on adult picky eaters.
[Edit: After reading this, my brother pointed out that I also used to hide bread crusts in the ventilation ducts. Apparently the smorgasbord was even bigger than I remember.]
Posted by Jess at 10:46 AM