My favourite part of Extreme Couponing was when Joanie talked about her stockpile. As she described her organizational methods and how she rotates goods according to expiry date, I was brought to a nearly euphoric state. "She's a woman after my own heart," I told Jay in complete reverence.

I want a stockpile! I too, want to rotate my goods according to expiry date! I want to never run out of toothpaste again! Having a stockpile would fit so neatly into my "clean as you go" life philosophy. Dishes should be cleaned immediately after eating, words should never be left unsaid and goods should be bought before you even need them.
However, this presents the first of two key considerations in realizing Year of the Deal. (More on the second consideration later in the week.) I live in a 700 square foot (if that) condo with no storage. No, literally. No storage. Don't believe me? I have proof. Let's take a quick tour: 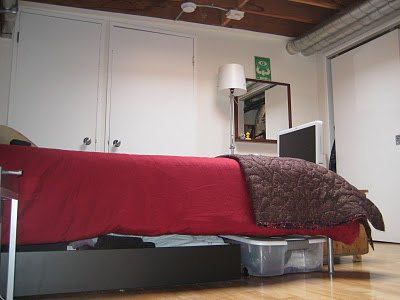 When we first viewed our place with the real estate agent, we were disappointed to learn that there wasn't a parking space or a storage unit. So when we first saw the upstairs, it looked promising. There was a very small clothes closet and what appeared to be two additional closets. 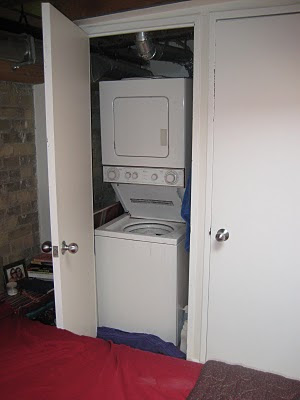 Er, not so much. Behind door #1: washer and dryer. 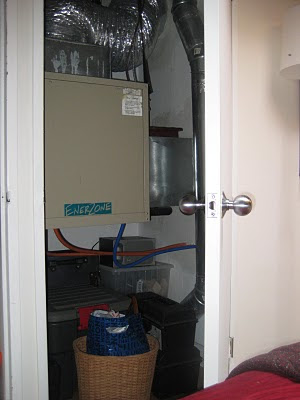 And behind door #2: a furnace and some fire hazards. 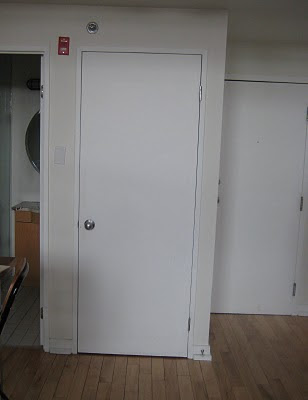 And what about door #3, the only other closet, downstairs? 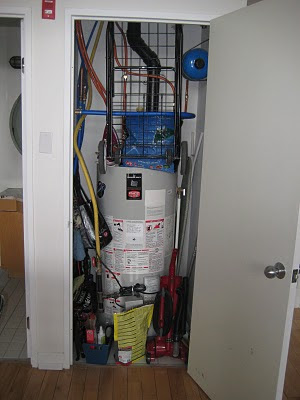 A hot water tank and more fire hazards.
So what do you do when you don't have a single closet in your house? The first step is to purge everything that isn't a necessity. In the year and a half since we moved in, we've conducted at least four major purges and we're still not done. Jay and I essentially only own what we need to live. We also utilize every bit of space possible. As seen in the first picture, we have a blanket box stuffed to capacity at the foot of our bed. Under the bed are bins for linens. Our furnace closet houses tools and suitcases, while the water heater closet holds dog food, grocery bags and brooms.
So where would the stockpile go? 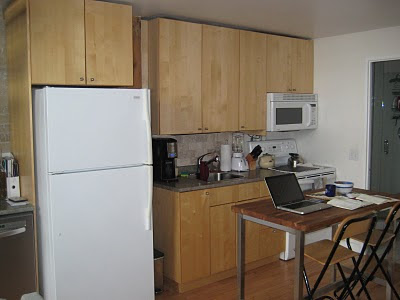 The kitchen seems to be the only option. Lots of space, right? 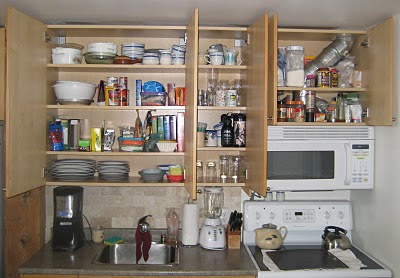 Again, not so much. (I took this picture right before I went grocery shopping and before I cleaned out the dishwasher, so this is when the cupboards were at their barest.)
So what am I going to do when prices drop low enough to buy a year's supply of Kraft Dinner?
I'm never going to have a stockpile like Joanie. However, I do have one thing working to my advantage. Unlike Joanie, I don't have kids. (Or at least none that I know about.) So a year's supply of cereal for me would for six boxes, not 25. My own coupon philosophy will have to be a bit more realistic. I will only buy truly what I need and I'll focus on expensive items that take up less space, like toothbrushes and razors. 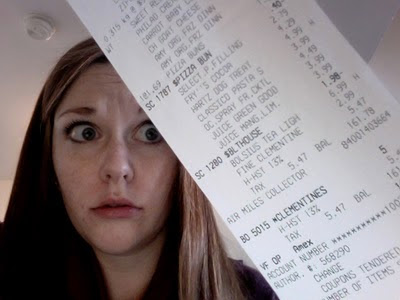 In other news, yesterday I went out for my last final grocery shop before I start actually using coupons. Including my AutoShare car rental ($20 for two hours) and a trip to the pet store to pick up Brockton's expensive organic dog food, I spent about $220. (On average, I would guess that we spend more than $300 a month on groceries. In other words, way too much.)
However, I still managed to fulfill part of my resolution:
-By shopping at Metro, I collected Airmiles on my purchase and paid with Amex to collect Aeroplan points as well.
-At the gas station, I collected double Aeroplan points by filling up at Esso and paying with Amex. (For those not familiar with AutoShare, aka the greatest thing to happen to young condo-dwellers ever, the cost of my gas will be subtracted from the cost of the rental. The rental, with tax, was $22 and I put $22 worth of gas in, so basically I collected double Aeroplan points on the rental. From this point onwards, I'll try to put gas in the car even if it's not my turn to ensure maximum point collection.)
-And the pet store? They don't accept Amex, but they do award Airmiles.
An expensive grocery trip, but I already have enough Aeroplan points to fly home to Alberta this summer. Let's see if I can make it to Malta for free.
Posted by Jess at 2:53 PM

Email ThisBlogThis!Share to TwitterShare to FacebookShare to Pinterest
Labels: coupons, organization, Year of the Deal