I live in fear of tomorrow--my first rehearsal. I'm covered in bug bites and my post-Guyana digestive system refuses to settle. I've missed the first three rehearsals already and I'm hardly one for choreography. (In fact, after my first-ever jazz dance recital when I was only nine, I overheard my mom talking on the phone. "She just doesn't have it, you know?" she laughed, commenting on my coordination [or lack thereof]. I dropped out of jazz the following year and enrolled in highland dancing, which requires slightly less musicality.)
Bugbites and poor coordination aside, I have another reason to be fearful. Another MUC candidate out West let me know that criticism at her rehearsal wasn't just relegated to dance moves or runway walks. "Of the 14 girls there, three got told to 'tone up,'" she told me. "I was one of them. It hurts a bit!"
This terrifies me. I've seen Facebook photos of the candidate in question in a bikini. If she was advised to tone up, am I going to be advised to have gastric bypass surgery?

It's wild how quickly something that started as a joke has turned into, well, something so serious. (Granted, it remains somewhat of a laughing matter, because I'm sure it's a huge cosmic joke on my behalf. Some omniscient presence is definitely up there, chortling on his cloud.)
So, in order to offset the very serious nature of prancing around in heels every weekend for the next month, I'm offering you this picture as a reminder that if you send $5 or $10 my way, you're supporting this as the face of Miss Universe Canada: 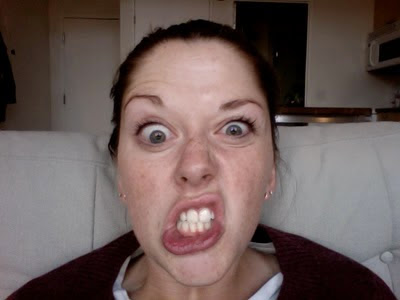 Click on the PayPal button below to donate.
Posted by Jess at 2:53 PM