A small price to pay

I can truly say that I don’t think I’ve even been in a situation where my self-esteem was both destroyed and high-fived all within a two-hour time period. Yesterday was possibly the first.


(Before you read this, I completely encourage you to click on the below video for some blog post appropriate ambience music. Did I learn a choreographed dance routine to this song? Yes, I sure did. But let's not get ahead in the story. Let's start at the start.)

On the way to my hair appointment yesterday, my cousin Katherine sent me a message to wish me luck.

“I imagine it will be like that time I went on a pub crawl with Geena,” I texted back, referring to the incident in which I went out with our 19-year-old cousin and was not only the oldest, but the “fattest” girl on the bus, “except without any alcohol.”

One hair appointment, one makeup application, several catcalls and zero meals later, I arrived at the St. Lawrence Centre for the Performing Arts, my black snakeskin purse containing little more than a purple string bikini, lip gloss and a tape recorder. In the rehearsal space, 50 girls were nervously fixing their hair in the mirror, reapplying lipstick and changing into high heels. None of us knew what we were in for.

First, we were assigned numbers. Then, lining up against each side of the room, we watched a male runway instructor in gold high-heeled boots demonstrate a walk. We would each have to perform the same walk in front of all the other girls.

Waiting my turn, I checked out the competition. One-by-one, I recognized girls throughout the room who had been at the first interview. “Weird,” I thought. “They all seem to be here.” Even the lawyer wannabe was present. In fact, the only one missing was the girl whose cell phone rang while I was answering my question at the first interview. I wasn’t surprised that she didn’t get a call back—she had also shown up more than 45 minutes late.

“Whatever,” I figured, “they probably just used the first interview to weed out the girls who don’t seem very serious.” At least there was some consolation in that.

Just then, she walked in. The cell phone girl. Of course, she was late, again. But she was there, all the same.

It hit me at once—I wasn’t special after all. They had invited literally everyone to attend the second interview. My $30 application fee was basically just like buying a ticket for a series of untold humiliations—whoever was willing to pay the price was allowed on the ride.

Digesting this realization, I heard my number called. Heart pounding, I followed the instructions we’d been given. A forced smile on my face, I started my walk across the room, a videographer filming my every move. Straight to the top right corner. Pose, turn and walk diagonal to the lower left corner. Pose again, pivot, walk straight to the lower right, and pose one last time. And finally, back to safety at the end of the line.

“Are you nervous?” the girl in front of me asked. “Yeah,” I admitted, thinking she would reciprocate with a statement of her own unease. “You look it,” she told me sympathetically.

Just in case it’s not clear, this is the part in the story where my self-confidence has not just been destroyed, but completely annihilated. Suddenly, I wished I was back on the school bus with Geena. Because at least that time I at least had my cousin by my side and shots at my disposal.

After a second nerve-racking walk across the room under the scrutinizing eyes of the runway instructor, the pageant director and the videographer, it was time to learn a dance routine.

Now, just to clarify, although I’m pretty awesome at badass grinding around in my apartment to early ‘90s rap music, learning choreographed dance routines doesn’t rank high in my skill set. And even if it did, I’m pretty sure that my preferred method of learning choreographed dance routines wouldn’t involve straining, from the back of the room, to see a tiny gay dance instructor over the heads of models in stilettos.

Since I think that last paragraph pretty much sums up the dance routine portion of this tale, I’m just going to fast-forward because I’m pretty sure you know how it ends. (However, if you really want to know more, please contact Miss Universe Canada. They have a tape-recorded version of my sweet dance moves available for your reference.)

By this point in the evening, I had come to a couple of key realizations: I can’t dance. I’m not great at following directions. Hell, I’m not even that good at walking. But the most important realization came as I watched the girls perform synchronized “showgirl” dance hands. “What does this, if anything, have to do with humanitarian causes?” I wondered. I couldn’t help but think about how many women worldwide would see this as very far from empowerment.

Then came the final challenge—we were instructed to change into our swimwear. Within moments, I found myself surrounded by 50 women at their most vulnerable. As I adjusted my purple bikini top in the mirrored wall, I glanced up to see 50 women’s bodies reflected behind me. There were short ones, tall ones, thin ones and less thin ones. There were fake boobs, real boobs, tattoos, bruises, stretch marks, scars and back acne. I know it sounds clichéd and lame, but everybody is different—even in a room of Miss Universe applicants.

But here’s the really amazing thing; I looked at all the women in the mirror and looked back down at myself. And rather than comparing or self-criticizing, I couldn’t help but think, quite simply, “I look good.”

One of the girls, all 5’10” and 115 lbs of her, came over to the mirror to adjust her top beside me. “You look good,” she told me, echoing my thoughts. Now, this might have been something that she was just saying—you know, like when you’re obliged to tell a bride that she looks beautiful. Or maybe it was just something you say when you’re in a room full of complete strangers in bikinis and you’re trying to break the tension. Or maybe she was looking for validation herself. But the thing is, I think she meant it. An amazon goddess thought I looked good. And more importantly, I thought I looked good. 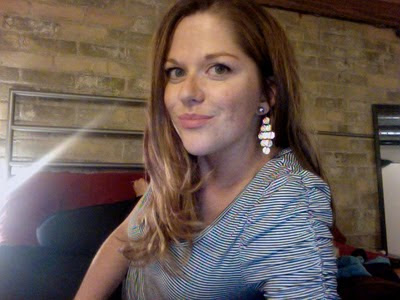 Suddenly, the nerves were gone. And suddenly, I was having fun.

We lined up to perform our runway walk again, this time in our bikinis. And as I passed the videographer for the last time, I grinned straight into the camera. Except this time, I wasn’t faking it.

As I left the centre, panties in my purse (two of my most hated “p” words in a single sentence, but I should get used to them since I’m a real girl now) I heard one of my fellow Miss Universe candidates behind me talking on her phone. “No one was really that special,” she told her friend.

Maybe that’s true. After all, they did invite everyone to attend the second interview. But I couldn’t help but think how very wrong she was. Because for some reason, despite it all, I left feeling like maybe, just maybe, I was a little bit special.
Posted by Jess at 11:45 PM