Since my foray in the world of beauty pageants, most of the advice I've received hasn't been advice at all--it's been in the form of questions.

At Terroni's, days after I found out about my invitation to attend the preliminary preliminary (very prestigious sounding, I know), I joined Jay and his co-workers for a late-night slice of pizza. (Late night pizza, in case you didn't know, is part of my official diet plan, or lack thereof.)

"Here she comes. . ." one of his co-workers started singing, ". . .Miss Canada!" And while I appreciated the song, I appreciated his question more.

"Are you going to get a spray tan?

Huh. I hadn't really thought about it.

In general, entering this pageant was not only outside my comfort level, but totally beyond my level of girl expertise. That is to say, my expertise in participating in stereotypical beauty queen activities. Don't believe me? Up until my third year of university, I didn't know how to blow-dry my hair. The only facial I've ever gotten for was a gift from an ex-boyfriend (and no, not in that way, sickos). I only cut my hair about once a year. And apart from my hobbit toes, I've never had anything waxed.

Regardless, I knew that maybe getting a spray tan was something I should investigate further. My only previous knowledge of spray tans was what I learned from watching episodes of Toddlers and Tiaras; I just assumed that spray tans were like a body paint. Turns out they're not. Spray tans are actually caused by a chemical reaction between dihydroxyacetone and the amino acids in dead skin. Gross. Why would anyone want to get a spray tan? 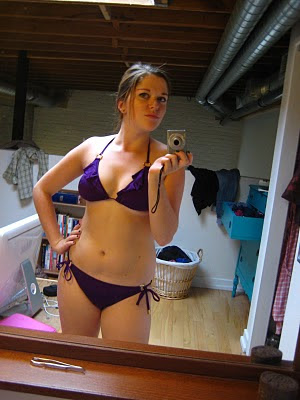 I'd just about given up romancing the idea of turning my skin into a science project when Raymi the Minx, whose blog I actively don't read, posted a Facebook link with the title "Tanorexia Nervosa." I clicked. It linked to Fab Find, where I managed to get 50% off a spray tan at Luxe in Liberty Village. Clearly, the universe wants me to get a spray tan. (It's booked for Wednesday.)

And while I should have been prepared to respond to the spray tan inquiry, my co-worker Amanda's question was the one I actually had an answer to:

"Are you going to try to lose weight some crazy way the day-of?"

I've spent a lot of time thinking about this one. More specifically, I've spent a lot of time thinking about that episode of MTV's True Life where the teenage beauty pageant queen only eats cottage cheese and then wins. Jay has also been trying to convince me that Dr. Ho's is the way to go. But while working out in layers of sweatshirts or only eating cabbage soup and ex-lax for a week is mighty tempting, I think I'm just going to stick with working out every day and attempting to eat less poutine.

With only four days left until showtime, I will take any more advice that comes my way. But don't worry--I know not to eat the shellfish.
Posted by Jess at 12:00 PM