Straight-up disclaimer: This will be the very last in a string of posts featuring my navel. I promise. But if you're not into belly buttons, you should probably stop reading now. 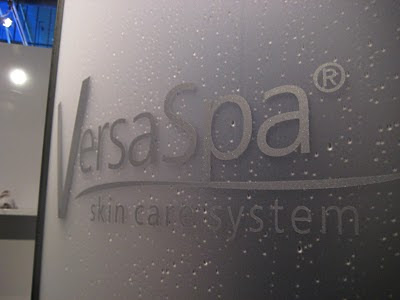 I survived the spray tan. I nearly thought I wouldn't, but I did. (It was like being naked in a space shuttle. A space shuttle that sprays you with chemicals. And talks to you. It was slightly terrifying to say the least.)
Here's what I may not survive: Friday.
So, I need help deciding what to wear to the second interview. And I figure that I should put it to the test, with you, my blog readers.
Jay, on the other hand, isn't so sure. "Are you sure you want to put that on your blog? Maybe we should just keep the decision between you and me."
"Jay, I've thought long and hard about this. When it comes down to it, if I'm wary of posting pictures of myself in a bikini on my blog, I probably shouldn't have entered a competition where a critical component of said competition is wearing a bikini and heels on stage in public."
"Good point."
So on with it. The two bathing suit choices. (Is this really what my life has come to?)
Suit 1: Black with Gold Stars 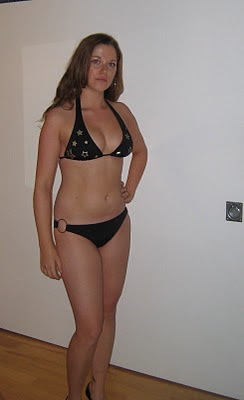 (Urgh. Admittedly, now that I see this, I feel awkward about it. Maybe it's because I looked like I've been lured from craigslist into someone's basement. Although, it really is a testament to the developing science project that is my post-spray tan skin.)
Pros:
-Fits better than the purple suit, particularly the top
-More comfortable
-Matches my shoes
Cons:
-I really shouldn't be wearing black, considering I'm super pale.
-It's not super classy. As far as wearing a bikini to an "interview" goes, it's less professional. I kind of look like I'm headed on that tropical beach vacation that I wish I was actually going on right now.
Suit 2: Purple Ruffles with Gold Details 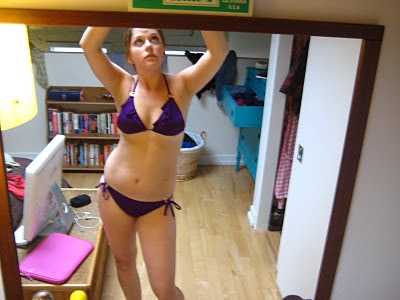 [Edit: For the record, this photo was taken three weeks ago--before all my hardcore workouts. For other pictures of the purple suit, please see the post below this one.]
Pros:
-Classier
-Purple is royal. Enough said.
-Wearing it would totally justify buying it (I purchased it after my layoff at the very end of summer. At full price. It has been worn once.)
Cons:
-Doesn't match my shoes
-Doesn't fit as well
Your votes can be left on Facebook or in the comments. And. . .go!
(And for those of you who are less than interested in all this pageant preliminaries nonsense, don't worry. I have a feeling that this little adventure will be coming to an end very shortly.)
Posted by Jess at 9:51 PM