The following blog post can also be found on my travel blog.
I’ve always had a policy to never write about work, but to always write about travel. So, now that I’ve found myself fulfilling my dream of being paid to travel for the first time, it has put me a peculiar predicament. When work is the sole purpose of the travel, how do you separate the two?
The second limitation in writing about my recent trip to Guyana is that I was only there for a very finite period of time. And after spending more than two years working for YCI, I’ve become hypersensitive to the perpetuation of stereotypes by international volunteers, aid workers and travelers.

Travelers (myself included in this statement) have a habit of reinforcing stereotypes through their photographs, their words and their stories, particularly in the case of developing countries. They photograph children playing with machetes, but fail to capture televisions glowing brightly in grass huts. They make generalizations about entire countries, but are very specific about the peculiarities of individuals and situations they encounter. Travelers, in many cases, are no better than World Vision ads.

Facebook and Twitter have only compounded this problem, where users must succinctly sum up their thoughts and experiences in 140 characters or less. And what better way to sum up an entire continent of people than by stating, “This is Africa”? In his essay, “How to Write About Africa,” Kenyan journalist Binyavanga Wainaina writes:

In your text, treat Africa as if it were one country. It is hot and dusty with rolling grasslands and huge herds of animals and tall, thin people who are starving. Or it is hot and steamy with very short people who eat primates. Don't get bogged down with precise descriptions. Africa is big: fifty-four countries, 900 million people who are too busy starving and dying and warring and emigrating to read your book. The continent is full of deserts, jungles, highlands, savannahs and many other things, but your reader doesn't care about all that, so keep your descriptions romantic and evocative and unparticular.

But I’m digressing. After all, we’re not talking about Africa here, we’re talking about Guyana. (Which, for the record, much like Vanuatu, is not in Africa. Also for the record, contrary to popular belief, I’ve never been to Africa. And while we're fact sharing, I just want everyone to know that in all my years of wanderlusting, I’m somehow completed avoided ever having to take a bucket bath.)

Regardless, generalizations about Africa are the same as generalizations about any continent or country. Guyana is a large, sparsely populated country. With less than 800,000 people and diverse landscapes ranging from mountains to savannah, it’s difficult to sum up an entire country based on less than 10 days of experience in only two regions. With these limitations and self-enforced restrictions in mind, I’m only writing what I know. I’m censoring myself.

I also took very few pictures—almost every photograph I took is posted here. Why so few? For a couple of reasons: I was not a tourist, I was working. And in many situations, I felt that if I pulled out my camera, I would only be perpetuating a key stereotype about white North Americans.

So, instead, here are the facts: 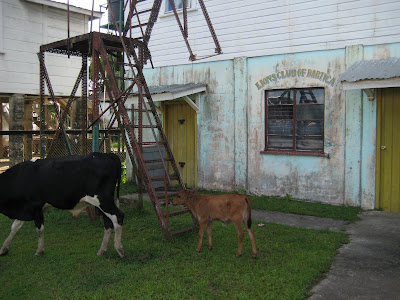 After an intensely long day (waking up at 4:30 am in Vancouver, arriving at 2:30 pm in Toronto, returning to the airport at 8:30 pm and arriving in Guyana at 9 am after a sleepless flight that even two Ativan couldn't help), we were immediately driven to Parika, boarded a boat that took us down the Essequibo River and were in Bartica by noon. 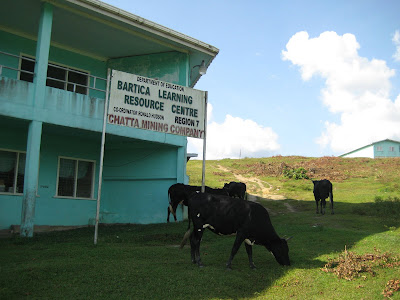 I wasn't there to work. Well, not quite. I was there for training. And in the case of the short-term job contract that I'm fulfilling, training meant two things: visiting a lot of places and meeting a lot of people. 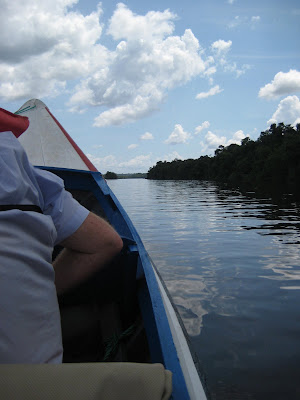 By day two, we were on a boat headed down the Essequibo to visit the Riverine communities near Bartica: Itaballi, Kartabo, Batavia and Karau. 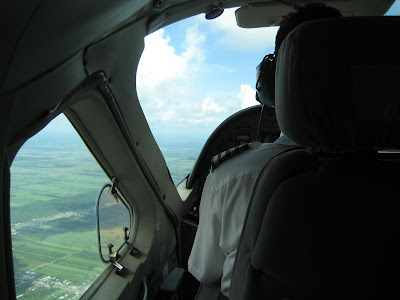 And then, after a quick night in Georgetown, we headed to Ogle airport to fly into Kamarang, which is in the interior of Region 7. It's also known as the Upper Mazaruni. 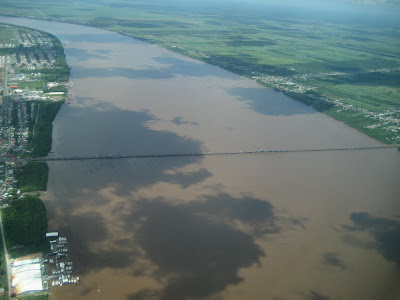 On the way there, I snapped this shot of the bridge that crosses the Demerara River. It's allegedly the longest floating bridge in the world. 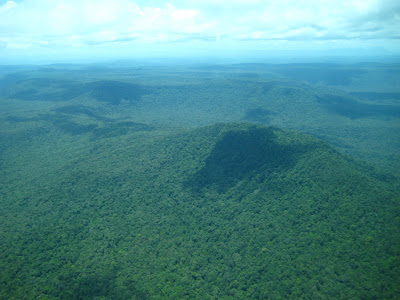 Flying into the Upper Maz, we got an amazing view of the Marume Mountains. 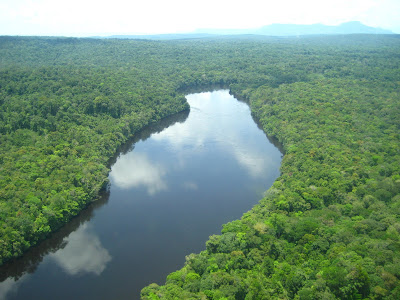 This is a photo of either the Mazaruni River or the Kamarang River, although I'm not sure which. 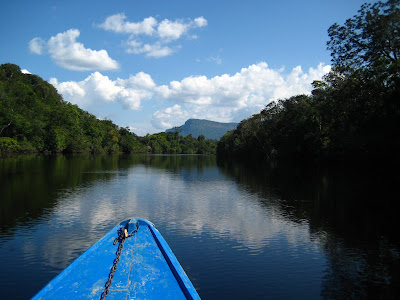 I was fortunate enough to spend one day travelling down the Kamarang River, then down the Mazaruni River (the two rivers fork and meet in Kamarang). Amerindian communities visited along the way included Waramadong, Jawalla, Quebanang and Kako. 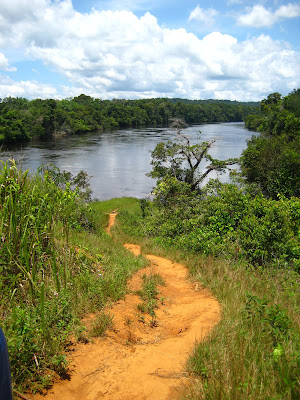 The highlight of Kamarang, apart from being in the thick of the jungle, was where the two rivers meet (pictured above). "It's like being in The Heart of Darkness," my trainer Bekkie said.
According to Wikipedia, the river is full of piranhas, black electric eels and snakes, including anacondas. According to the locals, there's nothing in the water (apart from diamonds and gold), and if there is, they're more afraid of us than we are of them.
I opted for the local version of events and gladly washed away the day's sweat in the river. Even a few inches below the surface, my hands weren't visible in the rust-coloured water. Who knows--maybe eels were inches away from my feet, with piranhas close behind? 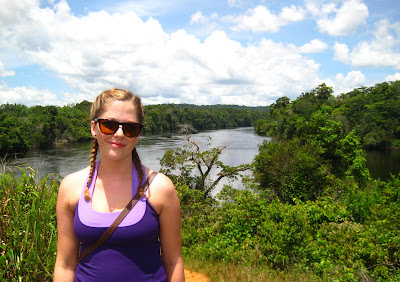 The sole picture of me in Guyana. Proof I was there, once upon a time.

On the subject of gold and diamonds, I heard rumours that it's projected Guyana has the largest deposit of gold (or was it diamonds?) in history. Every day in Kamarang, I inspected the airstrip for gold. Apparently, when the miners get drunk and pull down their pants to urinate, they drop the contents of their pockets, which at times can contain nuggets of gold. I found 40 Guyanese dollars, but will have to find diamonds on my next visit. 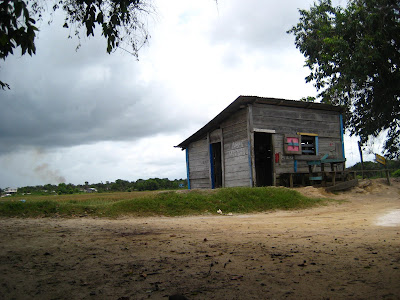 So, these were the facts. But it just doesn't seem like quite enough. So, a quick story, which may or may not perpetuate stereotypes, about an interaction I had in Capoey, the last community we visited in Region 2.
After a long day of travelling (first a car ride to Parika, then a boat ride across the Essequibo, then another car ride to Suddie and then onwards to the Capoey Lake Landing, and then finally, another boat to take us across the lake), we arrived in Capoey Mission, an Amerindian community of around 200 people. The lake was inviting after a day in the sticky heat--the water was warm and dark with minerals. After touring the community with a local teacher Esther, we walked back to her house so she could change into her swimwear.
We sat outside waiting, drinking fresh coconuts and talking to Esther's nieces, who we invited to join us. "We can't," the older niece told us looking at her cousin. "She has a problem." It doesn't matter what country you're coming from; "problem" was clearly teenage-girl speak for "period."
"That's not a big deal," I told the girls, "I have the same problem right now and I'm going swimming."
"No, it's not because of that," they told us. "They say if you go swimming in the lake while you're menstruating, you'll go mad."
Moments later, floating the lake, we asked Esther about the superstition. But to Esther, it wasn't a superstition. It was fact. "It's the lake spirits," she told us. "Years ago, our ancestors went mad from swimming in the lake. It makes the lake spirits angry."
So let this be the official record, in writing, that if I do ever official go mad, the lake spirits in Capoey are to blame.
Posted by Jess at 9:39 AM