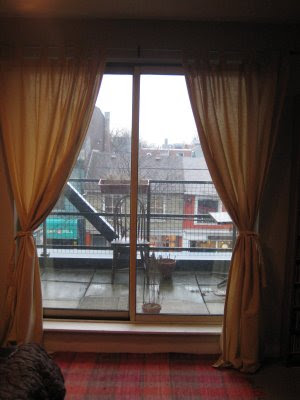 If I were going to write a letter home, it would probably read something like this: 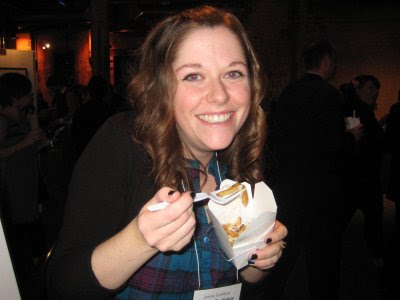 Dear Mom and Dad,
As of late, I've been a beacon of productivity. Work is going well. Last weekend, I went to the Distillery District to represent my organization at Timeraiser. The poutine was awesome, and the free drink tickets didn't hurt, either. 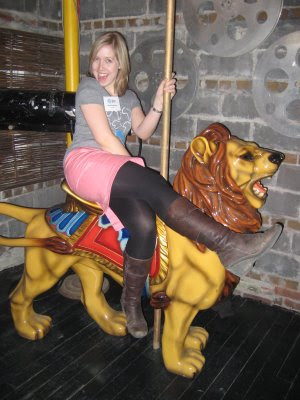 While the Timeraiser was all about getting other people to become more engaged in their communities, I decided I needed to do the same. So my friend Sarah and I volunteered at jhr's Night for Rights on Friday. 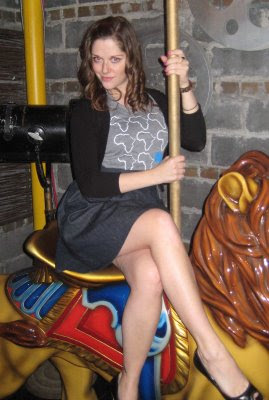 This past weekend, I also managed to clean out my storage closet, where I found (at least) four-year-old household garbage, giant spiders, mouse droppings, the grill from a GMC truck and enough clothing from 1997 to clothe a small developing nation. I only wish I was joking.
And then, instead of spending money on alcohol, I spent my Saturday night helping Sasha and Courtney work on their eco-friendly Cradle-to-Cradle fashion collection for Alternative Fashion Week. I plan on spending some more time in the coming weeks in the fashion lab helping them out. They're joking that I'm their "intern." 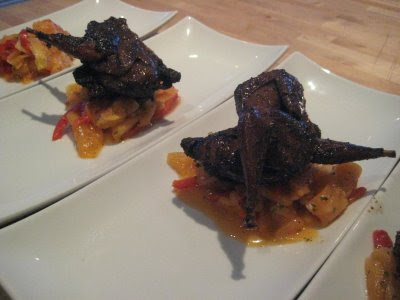 And in between saving the world, I still found time to serve at Hidden Lounge's new location.
Needless to say I've been keeping busy. Will write again soon!
Love lots,
Jess
Posted by Jess at 12:13 AM 3 comments

Check out these insane chocolates I received today for presenting to a class on sustainable community development: 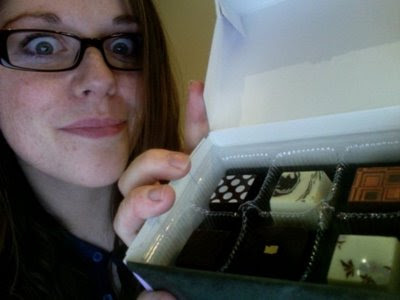 Part of the reason I find it so challenging to blog lately is because I have two steadfast policies when it comes to my online persona: 1. no blogging about professional employment and 2. no in-depth blogging about my personal relationships. (Y'know--apart from quite publicly accusing my significant other of infecting me with fleas.) It's too bad that 70 per cent of my waking hours are spent at work and, as of late, the other 30 per cent are spent with the manfriend. (Who, for the record, is, and probably always was, flea-free.)

Besides, my days are relatively mundane. Here's an example:

Today was the first time that I've been back at Ryerson since the fall awards ceremony. At the eyeopener office, Carla was running late, so I chatted with the eye staff who were kicking around the office. "What year are you in? I'm guessing second?" one of the guys asked. I had to laugh--especially since I was trying to look the part of young professional. (I had thrown on a pair of black peeptoes before I left the office in an effort to look a little less student.) Carla says it's because I looked wide-eyed and bushy-tailed instead of worn down by term papers. (And it's true--my favourite part of nine to fiving is the fact that weekends and my evenings are my own.)

Half an hour later, at the front of the class, I hoped that my heels were working their magic. That it, until I realized the effect was completed negated by the fact that I stood behind a podium for the entire presentation.

I don't think that falling asleep at 10 pm is voyeur-worthy or exciting enough for public consumption.

It was bound to happen sooner or later.
Posted by Jess at 3:16 PM 0 comments

Email ThisBlogThis!Share to TwitterShare to FacebookShare to Pinterest
Labels: adulthood

One Thursday night, I took the man friend out for dinner. Nothing too fancy--he had a beer, I had a wine, we each had an entree. The bill came to $57. No big deal, right? But the man friend balked when he saw me laying my money on the table. I constantly complain about being poor, yet I don't equate spending $65 to being an expense. So what gives?

Since everyone is talking recession, I might as well bend to market trends. In times like this, it's suddenly evident what people attach value to. Here's my list:

I'm Willing to Go Further Into Debt For. . .
Eating Out: I pack my lunches and make muffins twice a week so I always have breakfast. But I won't hesistate to spend money on brunch every weekend. What can I say? I'm a little bit of a foodie. 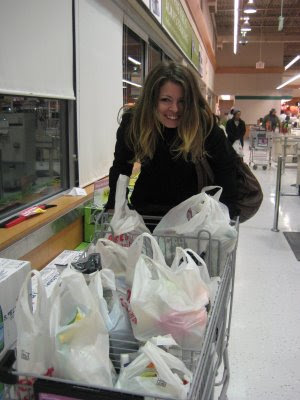 Clothing: I don't buy clothes often, but when I do, I'm known for my expensive taste. But there's a method to this--I would never spend $100 on five poorly-made shirts from H&M, but I will spend $100 on a one-of-a-kind shirt made of recycled materials by Canadian women in a sweatshop-free environment. And for everything in between, there's Winners and Value Village.

Travel: When I complain about getting paid in high-fives, I'm instantly criticized by friends for failing to buy groceries, but somehow managing to jet off to tropical locations. In the last year, I've been to the Dominican Republic, Mexico, Alberta and Nova Scotia (twice). Want to know a secret? I only paid for two of those trips. But it doesn't matter. For me, life isn't worth living without travel. So dropping money for planes and trains isn't a luxury--it's a necessity.

Time Spent with Friends: When I had my eye infection last year, I saved a ton of money by never leaving my house. However, I was a downer. Like, always. I cried. A lot. And I was boring. And since then, I can never turn down a social invitation. 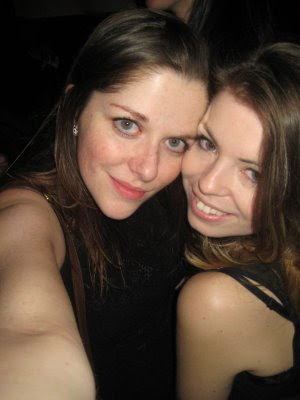 Money is for Fun. Not for stuff. I won't pay for. . .
Services: If I can do it myself, I'll do it myself. Dryclean only? I'll handwash it, or just not wash it at all. Heating? It's all about layering. And during the summer I don't even acknowledge the fact that I have air-conditioning. (I don't sweat, I glisten.) Haircuts? I estimate that I've saved $800 this year by trimming my own hair. I've also stopped dying it, so I don't even have to pay the $10 every two months for a box of hair dye. Cable or Internet? I don't pay for either. I have a coat hanger sticking out of the back of my TV and pray that my neighbours will keep their wirless unsecure. Even rent? I may live in a seemingly nice apartment, but it's drafty, nails stick out of the carpet, I have mice and my Dad is pretty sure there may be dead bodies in my hallway at one point in time. But the rent is cheap, so I'm happy. 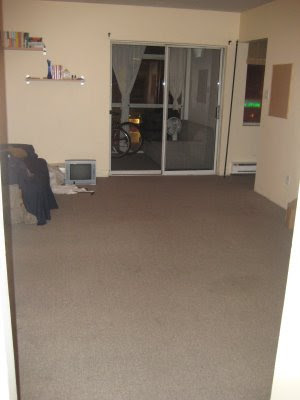 Home Furnishings: You all know people like me. We scour sidewalks for bedbug-free furniture on the first day of every month. When Natty moved out, I literally owned nothing. Since then, I've managed to pull my apartment back together for the low, low price of roughly $100. (I was too cheap to even buy dishes from Value Village, but managed to get a really nice donated set from Sophie and Karol.)

Electronics: I refuse to buy-in to the mantra of bigger-newer-better. My TV is small enough that renting subtitled foreign films requires serious consideration and commitment. My cell phone finally died for good on Thursday night, but I refuse to pay the $150 for a new one. (I'm living in isolation right now, but I'm sure a free cell phone will come my way. Who wants to contribute to e-waste, anyway?) And five years later, my computer is on its last legs, but I'm not going to get a new one until the day this one refuses to turn on.

Transportation: Can I walk, run, hitchike or bike there? Then I'm too cheap to pay for public transit. Can I get on the back of the streetcar during rush hour without paying? This is the only time I'm a law-breaker.

Alcohol: Pre-drinking is my friend. As are road-pops. Court and I cheersed to the first "road pop" of the season last night, then realized we were being followed by cops, then both tripped in efforts to conceal our liquor. Classy. 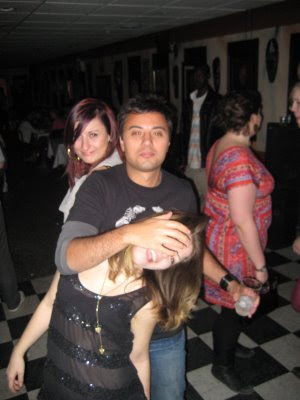 The Bottom Line?
I guess it's always been ingrained in me that money should be spent on activities and on living, not on stuff. I know it's cliched, but it's also true--you can't take it with you.
Posted by Jess at 1:38 PM 3 comments

Email ThisBlogThis!Share to TwitterShare to FacebookShare to Pinterest
Labels: debt 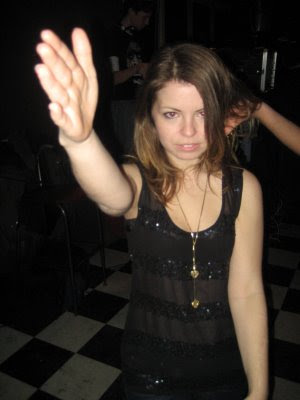 I never knew I'd take so much pleasure in being so exorbitantly boring.
Each day is a repeat of the one before and I don't really give a shit. Nine to fiving, showering, hitting send/receive, reading celebrity gossip sites, running errands, cleaning, paying my bills, making myself dinner, listening to the same music on repeat. 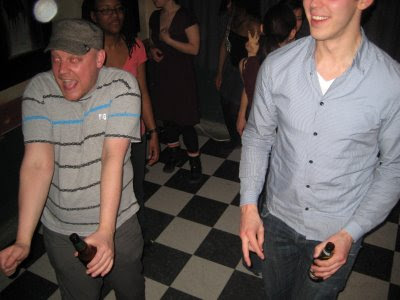 So let's fall into bed, live the same day over and over, make a buck, carry packed lunches and coffee in a Starbucks mug. Let's have brunch every weekend and a nap in the afternoon and let's spend each evening night in front of the tv, adjusting the coat hanger attenna. There's no tiptoeing left. 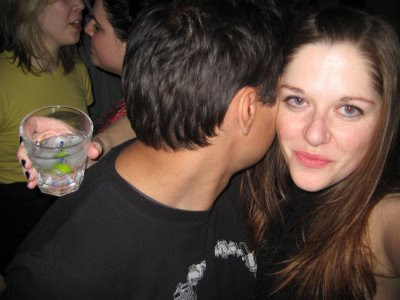 I'm going to write a million words, none of which are for him or her or them, few of which are for me, and all of which, by proxy, are mundane and not even worth being reduced to zeros and ones.

It's just the same pictures over and over and over again. Smile, flash, repeat. And I'm waiting. I'm slipping and I've slid, and thenextthingyouknow, I'm a house in the suburbs and subscriptions to gardening magazines.
Posted by Jess at 6:21 PM 7 comments