I hadn't been to a "youth conference" in nearly 8 years, so I had no idea what to expect when I stepped through the hotel room door and put my bags down. I can tell you what I wasn't expecting, though--a 16-year-old roomate, doodling "ill Scarlet" all over the hotel stationary, with her two teenage friends in tow. 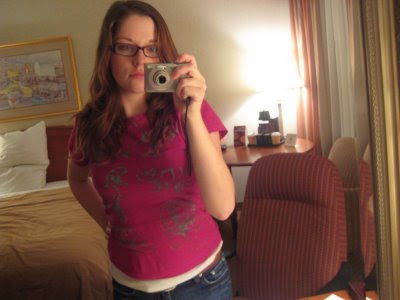 They didn't guess my age, though. I had dressed for the part, complete with dinosaur t-shirt, jeans and Converse sneakers.

My roomate, Ginger, was originally from a fly-in reserve north of Thunder Bay. "What's Toronto like?" she asked me, eyes big in awe. The TV in our room was always tuned to MuchMusic, she shared songs with me on her iPod and I knew that she couldn't possibly understand me when I told her that she was going to miss Thunder Bay someday--someday long after she gets out. (And I hope she gets out.) 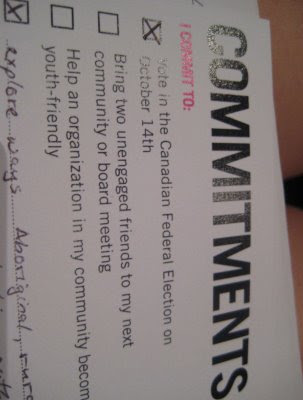 So what's the point here? There really isn't one. There isn't a romantic story of how Ginger reminded me of my past self. (She didn't.) There isn't a story of personal elightenment or self-discovery here to share. (I got drunk, made politically incorrect jokes and forced guys in striped shirts to do cartwheels.) This isn't the tale of what a stone cold fox the Governor General is. (She is.)

Instead, there's this: In the last federal election, 1.2 million Canadian youth didn't vote.

(Seriously, does it take that much effort to at least go and spoil your ballot? I voted in my first federal election when I was 16, not realizing at the time that it was a felony. I voted because I could, because of some glitch in the system. I voted because the ability to do so seemed like the greatest power. And although I barely believe in our democractic electoral system now, I still exercise that right because I have it.)
Posted by Jess at 10:44 PM

Email ThisBlogThis!Share to TwitterShare to FacebookShare to Pinterest
Labels: Toronto