A couple of weeks ago, Katrina was in my room looking at some pictures I have tacked up on my wardrobe beside my bed. She was trying to guess how old I was in all the pictures, and when she kept guessing wrong, I had to clarify for her, "All of those pictures are taken post high school."

It wasn't until I pointed this out that I realized my room is completely void of all evidence that I ever attended high school or had a life before university. (The reason why this is notable is because I'm a notorious packrat when it comes to memorabilia. I have, somewhere in my posession, every photo ever taken, every friendship bracelet ever worn, and every note ever passed to me in class. If you have ever sent me a postcard, written me a letter, or even written me an e-mail, chances are, I have a hard copy of it somewhere.)

With a little bit of extra time to sort through and clean my room this weekend, and inspired by Canice's post, I decided to take a photographic treasure hunt throughout my room for any or all proof that I ever went to high school.

These are the only artifacts I could find: 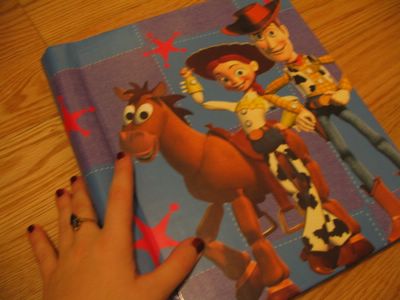 One very skinny half-filled photo album of random snapshots, school pictures, and concert stubs. The majority of the the content in this photo album is actually post-high school. 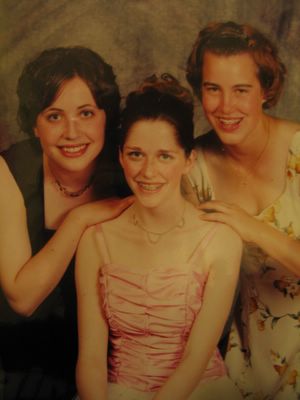 But it does contain treasures like this. Elana, Alex and I circa 1999. (This was technically junior high school, since we didn't go to high school until grade 10.) Check out the sexy way my collar bones protrude because I'm unhealthily skinny.* Awesome! 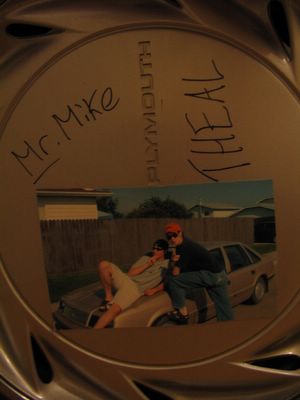 This hub cap (which was actually given to me by Mike when I moved to Edmonton, several months after we graduated) belongs to Le Baron that I spent a big chunk of my high school time in. The guy in the orange hat (Al) was the first person I ever made out with. He was my grade 10 boyfriend until he dumped me in favour of sleeping. 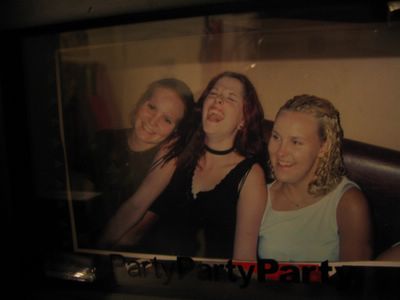 One framed picture, dating August 2002, featuring Naomi, Helka and I. This was also actually taken after I graduated, so it barely qualifies as a relic of high school.

Is this it? A photo album, one framed picture and a hub cap? Is this all that remains of 3 years of my life?

And that's when I found it: 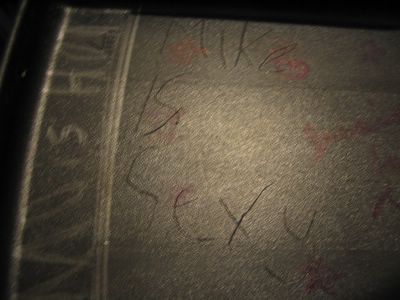 My high school graphing calculator. I was in Math Pure (advanced math) until I dropped out in grade 12. (It wasn't until after high school that an employer pointed out that I'm mildly dyslexic with numbers, which poses a huge problem when you're trying to solve algebra problems. Thanks public education system for failing to acknowledge this!) This is the calculator case. In pencil, someone wrote, "Mo is sexy." And engraved, someone wrote, "Mike is sexy." (And by someone, what I mean is, Mike wrote "Mike is sexy.")

People would always steal other people's graphing caculators, because they were worth hundreds of dollars. Sometimes they would be stolen and then mysteriously be returned with new words carved into them with a mathematical compass. My calculator was stolen many times, but always returned because it was unmistakable for anyone else's, due to all the engravings on the case and body of it. 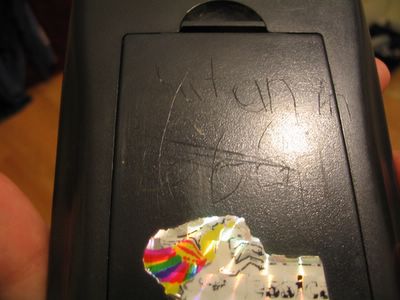 Satan was my high school "nickname" that people would "fondly" yell at me when when I walked through the school agora.**

And with that my treasure hunt ended, because I suddenly remembered the reason why I don't have any evidence of my high school existance.***

**Our school was shaped like a giant pinwheel, with the hallways being the spokes and the meeting centre in the middle called the agora. It was pretty much impossible to walk from class to class without walking through the agora, so this is where much of all the joys of high school occurred. At least in movies the characters can avoid the "meeting places" like the cafeteria by just not eating lunch there. This was not an option at our high school.

***This is not to imply that I didn't have good high school memories. But there's definitely a clear dichotimization in my personal history.