I put the ex in sexy. 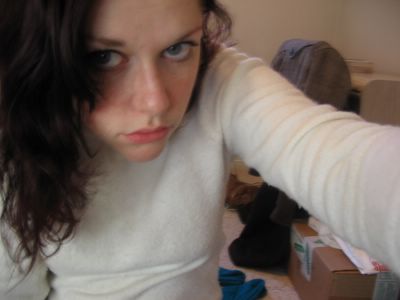 1. When Alex borrowed some Kleenex from me to throw his gum into, I kept holding onto the tissue even after he discarded the gum into it. "Um, do you want me to take that?" he asked. "Nope," I told him happily, "I kind of like the feeling how warm the gum is." 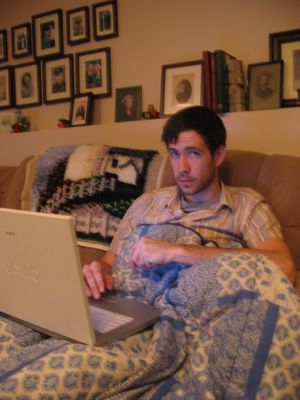 2. "I have as much toe hair as you. But I shave it off. I don't bother shaving my legs most of the time, but I always shave my toes." 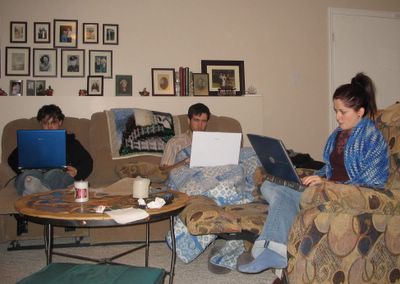 3. "I want to squeeze your blackheads. It looks like fun. There must be a lot of stuff in there. Like, when you squeeze them, is it painful? Or kind of enjoyable?"

Also this didn't happen today, so it clearly can't be part of the official list, but when Alex Dodd first arrived, I greeted him this story:

When I was at church with my mom and brother on Christmas Eve, we were getting a little rowdy in the pews, as per usual. We had to sing Silent Night which suddenly provoked a memory from my youth of the actions that going along with the song, which I started miming to my brother's amusement. This triggered another association in my head, to the time in Vanuatu where I was required to sing a song about Jesus that I had never heard before with actions that I had never performed before, in front of the entire church (yes, it turned out as awesome as one can surmise.) And of course, in a chain of associations, I suddenly started thinking about cannibalism on the island of Malakula.

And then, just as I'm thinking all these thoughts, we come to this verse of Silent Night:

Oh, and that's not all I'm doing to turn Alex Dodd's crank. In order to up the ante, or how do you say--put some more heart balloons over our cartoon heads?-- I've been pulling out all the stops. Today, we went shopping with my brother for some Yaktrax. I wore a shirt all of yesterday that read "I like to get it on with boys who vote" for the sole reason that I knew Alex Dodd would hate it (a little bit of tension always helps the relationship). This morning I made no disguise of my coughing up of flem loudly. I beat my mom, my brother, and Alex at Scrabble twice yesterday by more than 100 points each time, and gloated about it for the rest of the evening. In terms of non-Scrabble related conversation, we've spent a lot of time talking about produce, in particular the gases that different fruits emit and the key differences between rutebagas and turnips. (Can't you just see Cupid floating in the air? Swoon!) And of course, let's not forget my repeated impressions of barnacles (Alex Dodd thinks this facial expression and hand gesture is particularly sexy--he told me so himself). Then, to top it all off, I promised him a backrub which I never followed through on.

What can I say? I'm a natural Don Juan. If these tactics don't make the fluffy cuddly rabbits run through his head amidst rainbows, colourful fields full of fluffy clouds and wildflowers with a late 1960s soundtrack, nothing will.