I just returned home from my first shift at NXNE. The night was fruitful, and not just in the cherry lipbalm sense (or should I say scent. . .ahahaha!) of the word. Apparently having a named brand garishly whored out across every available space on your body is a conversation topic. Goodies from the night include:

-a condom from Australia
-a band demo CD that was given to me by some kid's mom
-a business card for "Things are Good.com"
-two pins and a sticker
-the best quote I've heard in a while, "Until you watch Stars Wars you'll never find a boyfriend who loves you completely." (Which only verifies what I said in my last post; 13-year sci fi nerds do in fact grow up to be 20-something indie music nerds. With beards, no less!)
-and an inflated ego from being shamelessly hit on all night

Rod, my partner, was not the keener I had initially accessed him of being. Unfortunatly, after talking to him for only 10 minutes, I said something along the lines of, "Man, I thought you were a keener. I'm so glad you're not." Rod, now knowing that I had already gossiped about him without ever actually talking to him first,* was not too impressed with me. He was also not too impressed with the speed at which I talked. (Apparently, I talk way too fast.) 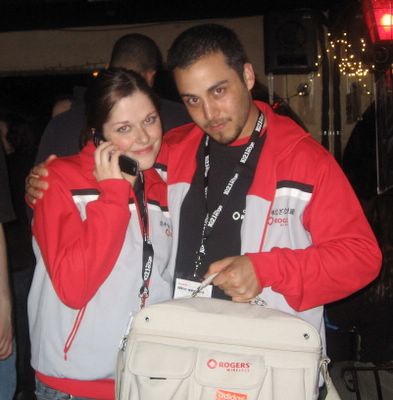 It took me the rest of the night to win his heart back, but now we're like an old married couple wearing matching Corporate whore outfits. It's too bad we don't have matching Adidas visors, too. I think it would complete the look.

First we went to Neutral where we checked out Red Shag Carpet, a band from Edmonton. After a twenty minute soundcheck and what appeared to be a prayer circle, one of the organizers walked over to Rod and I looking disgruntled.

"What the fuck?" he muttered to us conspiratorally under his breath, "most people just get on and off. Nobody does a sound check at these things! They just cut into 15 minutes of their set!"

Two songs later, I glanced over at the same organizer to see a grin on his face. "It was worth the wait, hey?" I asked him.

"It really was," he agreed, tapping along to the music.

And it really was. Red Shag Carpet was refereshing. There is no other way to phrase it. They were all solid musicians, who shared vocals amongst songs rather than delegating one of their members as the singer. I'd avoid likening them to Sloan, as would be the Canadian music critic standard cliche in such a case, but it's the only comparison I've got. However, they sound nothing like Sloan. Their sound was clean and upbeat, and I'm always sucker for a keyboard and maracas.

Parents will approve. Seventeen-year-old girls will have new hearthrobs.

It was fucking refreshing.

Other bands worth checking out: 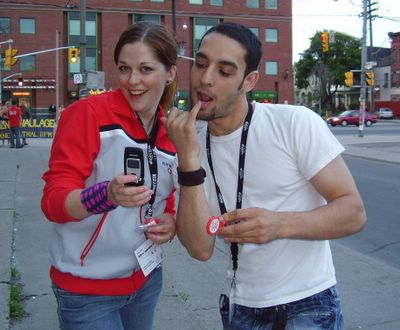 Some random guy, loving the lipgloss. 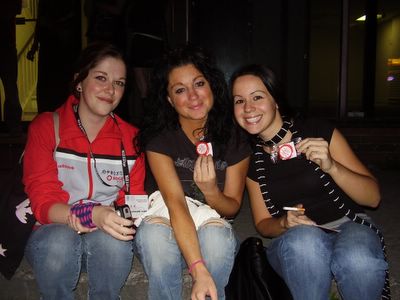 Actually, the lipgloss was a hit. It was kind of weird. 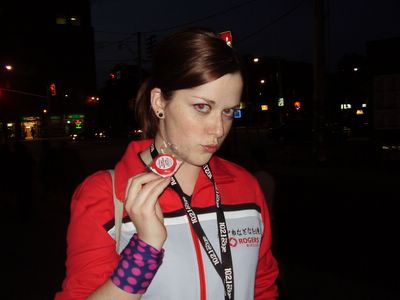 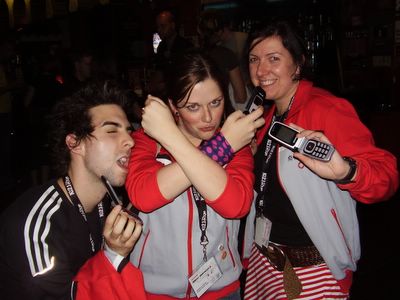 We thought our outfits maybe made us look like superheroes. Or possibly an intense bowling team. 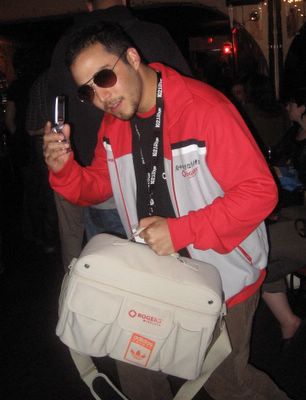 Most accurately though, we kind of look like Adidas-sponsored paramedics. Lip gloss, after all, can save lives! 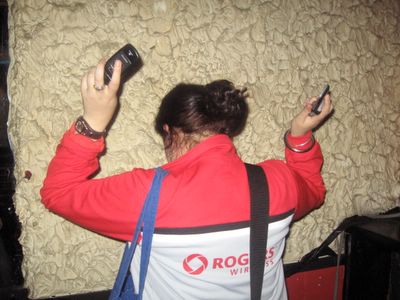 *I know I'm a bad person. I don't mean to be. It was a beer and Oilers-losing-the-hockey-game invoked rant. I was also dissapointed because Alice wasn't my partner. I usually don't judge people, just to clarify!