Gandalf has nothing on the cherry flavoured lip blam

For the past few nights, the smell of cherry flavoured lipbalm has been invading my nostrils as I sleep, messing with my REM cycles, and causing nightmares.

If you're not entirely clear on how lip balm can invoke nightmares of sleep-depriving proportions, let me explain.

The levels to which I'll lower myself to make money, never fail amaze even me. I thought I had reached my all-time low a couple years ago when I subjected myself to an entire day at Walmart handing out trading cards, while dressed as Gandalf the Wizard for the release of the Lord of the Rings DVD.

However, the current promotions I'm involved with for NXNE may surpass even the horror of being hit on by 13-year-old pimply sci fi nerds all day. ("Hey, I'll trade you a dwarf card for my goblin card, if y'know what I'm saying!" "Why are you dressed as Gandalf? Have you ever considered dressing like Princess Leia?")

First, there's the aforementioned lipgloss. At training, our supervisor handed us out laminated cards of paper.

"These are the emergency numbers you need in case you need more lipgloss," she told us. "If it's an emergency, and you run out, we'll bring some more to you!" 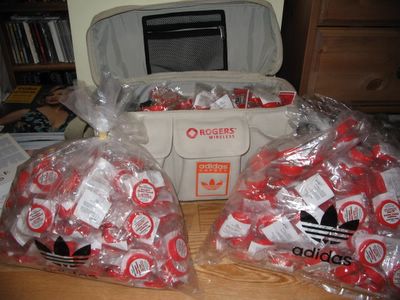 Somehow, I don't think I'll be needing the emergency numbers.

Second, I'm suddenly a corporate slut. Other than a Club Monaco shirt that was given to me by my Grandma at Christmas (long after Club Monaco was actually cool), I've always prided myself on not having name brands garishly whored out across my chest. However, working for [input name of cell phone provider here], I'm now the proud owner of:

1) An Adidas First Aid bag, approximately half the size of Alice, which I'm sure will come in handy for holding beer and some cold sandwiches for all those fishing trips I go on. Currently, it is holding the lipgloss.

3) An Adidas zip-up featuring some mystery Japanese writing, which Scott suggested may have been cleverly embroidered onto the garmet by a sweatshop worker, the translation being "Help me!"

4) A pair of brand-new Adidas running shoes, which are the one thing I actually want, but the order has been delayed and I may never receive them.

It should be an interesting weekend. After all, everyone knows that 13-year-old sci fi nerds grow up to become 20-something indie music nerds. 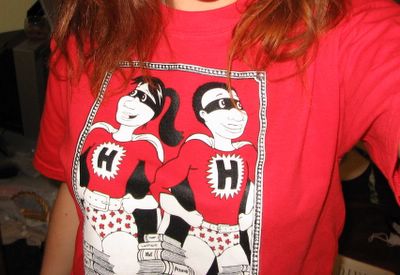 On a totally unrelated note, check out the t-shirt my mom sent to me without any sort of note or explanation. I can only presume from the stack of book surrounding the superheroes that it is from the summer reading program at the library.

Anyone want to hedge a guess as to what the "H" stands for? (I'll let you guys throws some ideas out there before I call home on Sunday and ask her.)