I want to be on Whyte Ave right now.

Monique is sitting on my bed right now. "I want to read Jess' first hockey blog post ever," she said.

Which is why I am writing this. 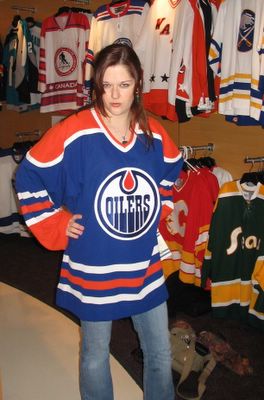 (However, this is actually my second hockey blog post ever. Let's not forget the memorable day when Monique and I went to the Hockey Hall of Fame, and wanted to have our picture taken in front of the Oilers display, but they didn't have an Oilers display, despite the fact that the Oilers won the cup in 1984, 1985, 1987, 1988 and 1990. . .so we decided to create our own "Oilers display" in the gift shop, much to the amusement of the on-looking crowd. And by "crowd", what I actually mean is "a couple of guys who were laughing at us.")

- I asked a lot of questions, because I'm a hockey fan, not a hockey follower.* Unlike some enlongated explanation guys have tried to give me in the past about the way the series play-offs work, Mon explained it all so that I understood in five sentences or less. There is now so much more clarity in my life.

-Monique cried when we won. I was happy. Sasha was even happy. We were proud.

-And then we debated creating a mini-old school Oilers jersey for the kitten. 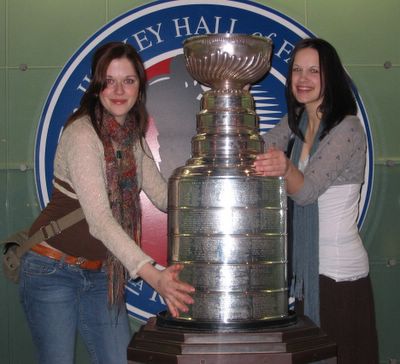 Monique just said, "I think when you and I touched the Stanley Cup, we brought amazing luck."

I have to concur with Monique's logic on this matter. Two northern Alberta girls both randomly move to Ontario, stroke the cup, and the Oilers make the Finals for the first time in 16 years?

Coincidence? I think not.

And on a closing note: I'm a big fan of the play-off beards. (Best. Superstition. Ever.)


*My hockey-watching habits are much to my mother's disdain; she does not encourage me to watch sports, particularly hockey, under any circumstances. Questions were necessary because I did not grow up in a hockey household, and have never even seen my Dad even watch more than 2 minutes of a hockey game at a time. It is somewhat embarassing, because at this point in my life, it seems as though the way the playoffs work should be knowledge that is just innately ingrained into my brain, upon being born in Canada. Sort of like Canada's Wonderland. (Which, by the way, no one outside of Ontario knows about. Just so you all know. it's not "Canada's" Wonderland. It's actually "Ontario's" Wonderland.)
Posted by Jess at 12:44 AM