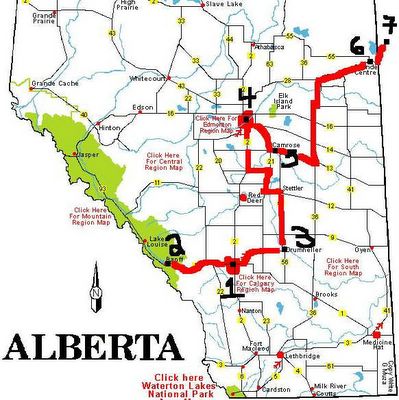 It's confirmed! Brie and I are embarking on Alberta Roadtrip 2006 (which is just the working title for the trip, I'm sure we'll come up with something incrediably clever and loaded with sexual innuendos later, but for now "Alberta Roadtrip 2006" is merely functional).

1) Thursday, April 27th- Fly in to Calgary. We'll feel like grown-ups for roughly 2 minutes when we get the keys to our rental car and throw our bags in the trunk. However, I'm sure once we start sucking away on juiceboxes and singing along with The Magic Numbers that grown-up feeling will be greatly relinquished.

2) Daytrip to Banff. We will go to the hot springs, and Brie will wear her new American Apparel bathsuit. I will wear nothing. We will then smell like sulfur. (Yes, the way we will smell is part of the official schedule. You wanna fight about it?)

3) Drumheller/The Badlands. Dinosaurs don't need to be justified any further.

4) April 29th- Edmonton. We will stay with Mike, go to the mall (because that's what you do in Edmonton) and likely consume beer at the Garneau Pub.

May 2nd- Katherine's birthday celebration at Ezzie's. Brie will learn my most shameful secret; I'm a terrible two-stepper. Chloe and I will likely set something on fire.

5) May 3rd- Hungover in Camrose. Visiting my Grandma on the farm. I will make Brie listen to the Nitty Gritty Dirt Band the entire way there.

6) Cold Lake- The entire smalltown mythology that I've built for Brie over the past year and a half will suddenly come crashing down.

"Jess, I thought you said your high school had no windows. That thing has at least TWO windows!"

"I thought you said all the girls in Alberta were pregnant and barefoot in the kitchen? Well, that chick is definitely wearing sandals!"

"Um, no offense Jessica, but I thought you said you were popular in Alberta."

I will feed her some more $2.50 highballs at the bar, and she won't know the difference.

7) Daytrip to Pierceland, Saskatchewan, to go to McLellan's General Store. We'll probably buy some bridles and horse whips. Not for our horses, but for our own personal stables. By this time, Brie will be an awesome two-stepper and know all the words to the Nitty Gritty Dirt Band songs. In otherwords, she'll be a better Albertan than me.

[Edit: As of Tuesday night our airline tickets are confirmed. And another surprise--Court is coming too!]