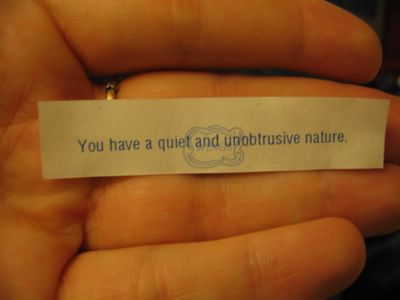 Did someone out there get a fortune that said something to the effect of "you have a loud and demanding presence"? Because I think I might have gotten your fortune by mistake.

On that note, last night after eating cheese fondue with the roommates and Alice, we watched the scene from The Doors where Jim Morrison drinks blood with the witch and then proceeds to have mad sex* with her. Within moments, the conversation quickly turned into what is the first official competition in China.

The challenge? To see which one of us can have sex on the roof first.

The prize? Well, the winner gets to have sex on the roof. And bragging rights, of course.

Unfortunatly, Brie has two obvious advantages in this competition:

2) She is currently the only one with an (allegedly) willing partner.

I'm definitely the underdog when it comes to this particular competition. But, I'm always up for a challenge. . .especially the ones that were my idea in the first place.

*Note to self: next time you bring a guy home, play "O Fortuna" from Carmena Burana, for ultimate seduction. Also, don't forget to get a chalice for blood drinking, because according to Katrina, drinking directly from wounds isn't as classy or sexy as drinking from a chalice, although I beg to differ.