Well, I'm mobile again, and drinking some delicious iced tea, before I start in on the rye and coke again.

So, just for the hell of it, I'm posting pictures of Halloweens past. 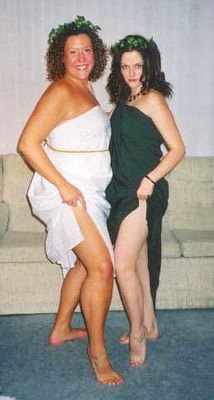 2003
My cousin Katherine, Chloe and I all dressed up in togas. By the end of the night, I had acquired half a set of handcuffs, a gun, and when I got undressed, plastic pumpkins tumbled out of my underwear. The night was such a disaster that I vowed I would never drink again. 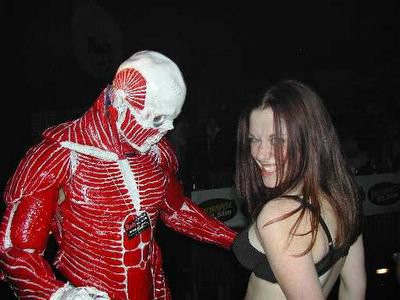 2003: This was about a week into my sobriety, and the classic "lingerie model" costume. Katherine told me I would be her hero for a year if I wore this to the bar. (Then again, she also said the same thing the time that a stripper wanted me to flash her. But that's another story.) Not only did I wear it to the bar, sober, but I also dance on the stage with this guy. My favourite thing about this picture is the direction his gaze is blantantly going in. 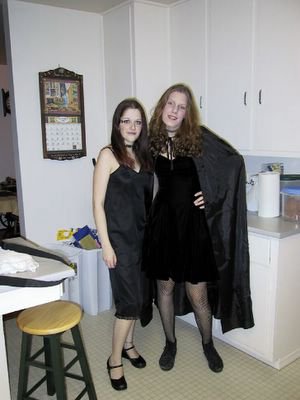 2001: Grade Eleven.
Janel and I went out to a base dance. We were the only people there dressed for Halloween. The sad part is though, this wasn't a costume for me. This is actually how I dressed in high school. But, if you've seen my driver's liscense from that same year, this should come as no surprise. 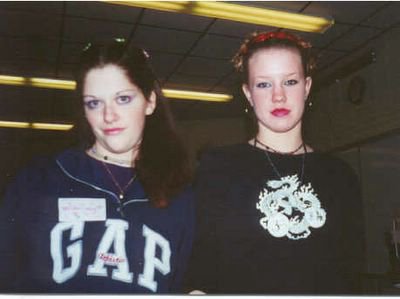 This was my Halloween costume that I wore to school that same year. Yes, I was a Gap Pod Person, complete with butterfly hair clips. My most terrifying costume to date. 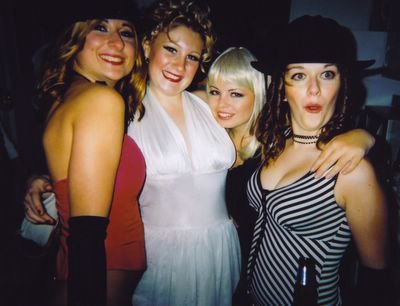 2004
Courtney and I were burlesque showgirls, Brie was Marilyn Monroe, and Sasha was catwoman. 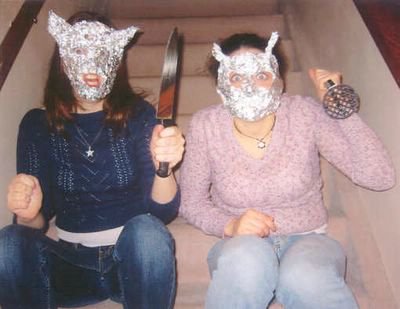 From the Calendar. October 2004.
Chloe and I got creative with tinfoil.
Posted by Jess at 8:22 PM