Yesterday, Kasia called me and mentioned it was pouring rain. My window faces a brick wall, so I went into Brie's room to watch the rain fall. While I was watching, I took a mental note of all the stuff on our roof that the subletters left behind that would have to cleaned off the roof at some point. 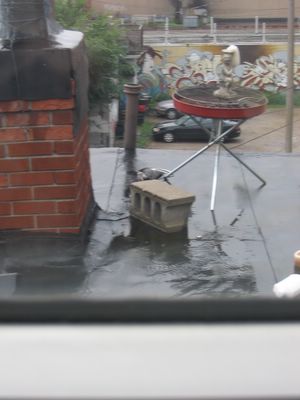 There was Mark's barbeque, lighter fluid, candles, a random cement block and a dead pigeon. Wait a second. . .

In disgust, I informed all the girls that we had a dead pigeon on our roof, and that there was no way we could leave it to rot. We came to the conclusion that we're modern women and could take care of the problem ourselves. After all, we put up the shelves in our kitchen by ourselves- we even own a studfinder. What does a dead, rotting pigeon have on us? 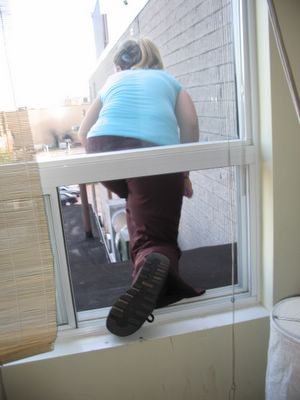 Sasha was the first to venture onto the roof. 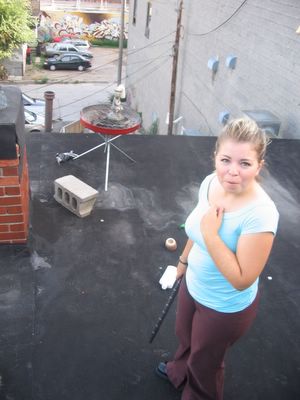 The smell was overwhelming, and the pigeon was covered in swarming wasps. 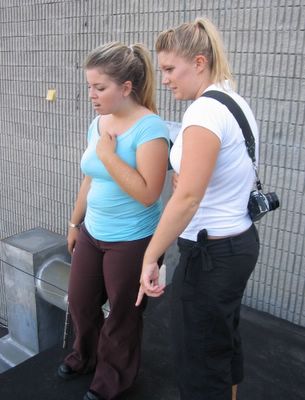 Even if I had asked Brie and Sasha to pose, I don't think they could have possibly produced faces this horrified. 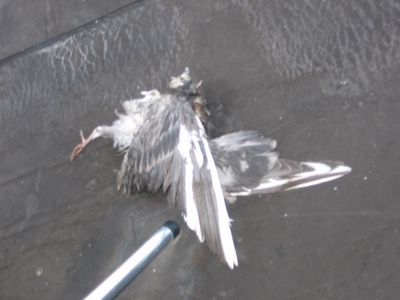 Maybe it's because we discovered that the pigeon was lacking a head. 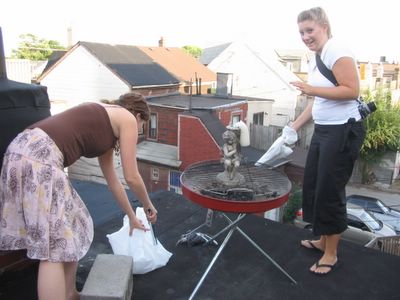 Sasha graciously offered to assume the arduous task of photographically documenting the event, while Brie and I armed ourself with our Project Pigeon tools. I held the official "pigeon poker" and garbage bags, while Brie dominated the garbage bag-covered dustpan. 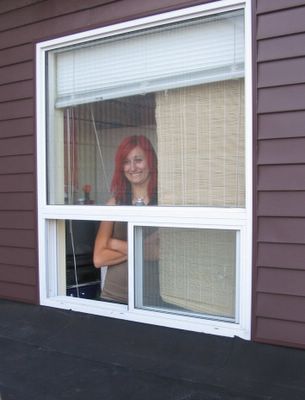 Courtney supervised from a safe distance.

Brie and I moved towards our target, but the moment we touched the bird, wasps began swarming angrily around us and we calmly backed away. Okay, I guess more accurately we ran away screaming. The whole pigeon is filled with wasps.

So I came up with the only solution I could think of: 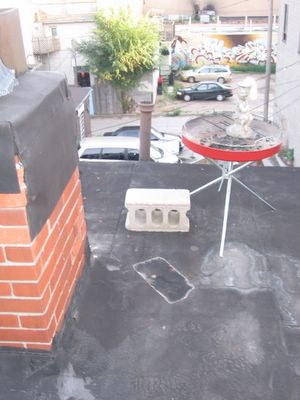 I moved the random cement block in front of the carcass. In this case, "out of sight, out of mind" definitely applies. At least it's going to have to for now.

*That is, if we can get any boys brave enough to dispose of the body for us. Or maybe, we'll luck out, and the racoon that must have carried the pigeon to the roof in the first place will come back for the remains.
Posted by Jess at 6:28 PM